NOTICE: In november 2015 a detailed hand chart for Neuroticism has been presented!

The behavior dimension NEUROTICISM relates to a person's sensitivity for emotions. The importance of this is indicated by the observation that in daily life our emotions steer our behavior.

The importance of the behavior dimension NEUROTICISM is also indicated by the fact that this word is included in various personality theories (1). Usually the word NEUROTICISM is associated with a sensitivity for negative emotions, emotional unstability, or the lack of emotional self-control.


The sequel of this page will discuss the meaning of the dimension NEUROTICISM in the perspective of the so-called 'Big Five'-model. Next I will present some research results which indicate that certain characteristics are frequently observed in the hands of high scorers on the Big Five dimension NEUROTICISM.

As suggested by the word NEUROTICISM, subjects who used to labeled with the diagnosis 'neurosis' usually score high on the Big Five dimension NEUROTICISM. Despite high scorers have an elevated risk for certain kinds of psychopathology (especially depression, generalized fear, and agoraphobia), the dimension NEUROTICISM should not be considered as a measure of psychopathology (2). For the theoretic concepts behind the 'Big Five'- model are focussed on the everday behavior of people.

Would you like to measure on-line your 'Big Five'- profile? HERE & HERE you can fill in a questionnaire.

Finally one can notice that the 'Big Five'- model is also being used to perform research on behavior related issues like for example: sport psychology and personality disorders. 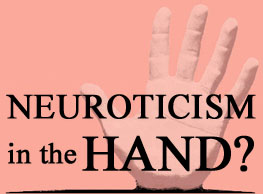 The Big Five dimension NEUROTICISM is related to the emotional aspect of human behavior. In the late 40th's the Polish psychologist Charlotte WOlff has executed a serie of research programs focussed on studying the hand in the perspective of the emotional aspect of human behavior. On the basis of studies (3, 4) with people who have a psychological handicap Wolff has written (1951, p.42):


One can conclude from these words that Wolff has discovered that a psychological handicap is frequently accompagnied with remarkable marks in the palmar creases. On the basis of my own studies I would like to add that remarkable marks in the palmar creases (and dermatoglyphics) are as well found in the hands of men who have autistic spectrum disorder - check out the section autisme - and people who score high on the Big Five dimensie NEUROTICISM.

I have documented my observations in the following research reports [these reports are only available in Dutch language]:

These research report describe line of actions for an assessment of the Big Five dimension NEUROTICISM on the basis of a series of handfeatures. The sequel of this page is dedicated to the most researched hand feature: the simian-related heart line - by the way: the first research report is also focussed on this hand feature.

By means of the NEO PI-R questionnaire the Big Five profiles of 13 Dutch subjects with a simian-related heart line have been measured. By the way, these subjects were all participants in my Master-thesis study or the follow-up study.

The figures below show the Big Five scores of a sample of in respective 9 women and 4 men. The dotted lines in the figures show the expected percentages taken from the manual of the NEO PI-R questionnair. Every single Big Five dimension is expected to show a 'normal' distribution: 22% scoring 'low' (score: 1, 2 or 3), 56% scoring 'normal' (score: 4, 5 or 6), and 22% scoring 'high' (score 7, 8 or 9).

A simian-related heart line appears to be accompagnied frequently with a high score on the dimension NEUROTICISM, in both the studied men and women. When the results of both sexes are considered together the overall result on the dimension NEUROTICISM is significant at: p<0.005 (according the Pearson ksi-square test). 61% of the studied subjects with a simian-related heart line score 'high' on NEUROTICISM, while on the basis of a 'normal' distribution a percentage of 22% was expected.

When the results of both sexes are considered together there appears to be a relation as well between the simian-related heart line and a low score on the Big Five dimension Extraversion, significant at: p<0.025 (according the Pearson ksi-square test). But this effect appears to be less strong compared to the results on the Big Five dimension NEUROTICISM.

Finally one can notice that the above mentioned research results confirm the insights regarding the simian line, which have been gathered by scientists over the years. For the results of hundreds of studies indicate that the simian line is frequently accompagnied with various variants of medical pathology. The most well-known example concerns Down's syndrome (5) - this example is frequently observed on the websites of traditional handanalysts. HERE you can find the website of a lady who has a simian line in her left hand; next to her personal thoughts (sometimes quite neurotic) about her simian line does she describe quite a lot of information about the (medical) backgrounds of the siman line.

Combined with these insights on the 'famous' simian line, one can derive from the above described results that the simian-related heart line is not only significant in the perspective of (Big Five) psychology. For in line with the earlier mentioned observation that high scorers on NEUROTICISM have an increased risk for certain forms of psychopathology (depression, generalized fear and agoraphobia were mentioned), it is likely that some day the simian-related heart line might appear to be an indicator for psychopathology as well.