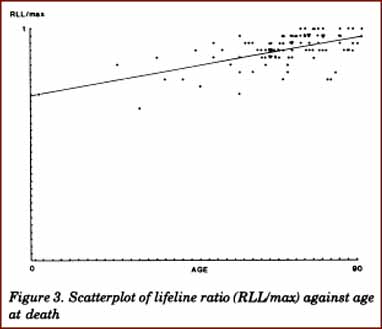 A close association was demonstrated by regression analysis which yielded the following equation which was not materially improved by incorporation of data from the left hand:

Can the results be explained by a 'spurious' effect?

The researchers describe the following in their discussion:

"Observer bias is possible though this was minimized by concealing the hypothesis from the measurer and recording age from the notes after the lines have been measured.

With increasing age we all become more wrinkly and this may equally apply to palmar creases such that they elongate with age."

Research on hand lines has been done for quite a few decades now, but there are not many sources available which make reports on changes in the primary creases.* Nevertheless, we must notice in this perspective that professor L.S. Penrose (an expert in dermatoglyphic research) stated in 1973 in his famous article 'Fingerprints and palmistry' that the lifelines may become more complex as age increases. However, at certain ages the reverse may also be true: there are reports availabe that describe that at young age primary creases may get shorter; this has especially been noticed regarding the unusual long version of the head line - a.k.a. 'the Sydney line'.

The researchers also stated in their discussion:

"Unravelling this would require a case-control study with living controls - or better still: an 80 year prospective study in exotic locations to report preliminary results. "

A reader of the Journal of the Royal Society of Medicine commented ironically (1991):


'Regarding their suggestions of 10-year meetings in exotic locations,
may we suggest... Las Palmas for the first conference?'

After the publication of this article, my collegue Lynn Seal proposed another interesting (older) study focussed on the potential relationship between the length of the lifeline and longevity.

The results of that study were officially never published - but the research have presented some of their results via various sources, including a letter in the Journal of the American Medical Association (Wilson & Mather in JAMA, 1974) and in a more obscure journal 'The Actuary, 1974'.

Fortunately, some of the data of the 1974 study became available in a manual for 'Practical Stastics' (see menu: Excell Project - chapter 1). Unfortunately, the data of case 51 is missing in that data, but nevertheless it is for sure interesting to take a look at some details in the results of that study:

So, one could wonder:

Why did the researchers ignore that fact? Another example: from the 7 subjects who died at age 50 or earlier, 3 of them had the 'interrupted life line' (NOTICE: in 1974 the average life expectancy was already close to age 70).

And what would have been the implications for the results when the researchers had NOT ignored the interruptons? The postion of the red dots would have shifted to a much lower location, likely below the position of all other dots!

Though, the same can be said about 3 of the 6 yellow dots: their position would likely shift to a much lower location as well. Regarding the exact implications We can speculate (as the details for the yellow dots are missing) howevever if the highest positioned yellow dot (at age 82) doesn't have the 'interrupted life line', a correction for 'life line interruption' of the data would likely produce a higher correlation!

And finally, one can only wonder:


... when will the first study be presented that considers both the LENGTH of the life line and the presence of INTERRUPTIONS in the life line?

(First we'll take a closer look at the 1990 results and then we will see how a short life line can be recognized as an indicator for abnormal form or funtion in the early developing hand!)


A closer look at the results of the 1990 study reveals that the average age of death (see the "A"-s in the picture above) is getting smaller for hands with a likewise life line length. And it's quite fascinating to see how the averages (A) are positioned creating the impression that they almost form a straight line!

However... the pink zones are most realing in this picture. Because the pink zones show that the ages of the subjects in each 'equal length of life line'-group tends to vary between 25 years and 50 years!

So, despite the rather impressive very significant result according the statistics - the truth is that the length of the life line does not reveal much about the age of death in an individual at all. Because within the groups of individuals who have a life line length that is about equal, the actual ages of death in the individuals tend to vary up till about 5 decades!!!!

Well, the explanation is found in findings reported by other researchers: scientific studies of palmar and digital creases in the developing hand revealed that in malformed hands the major hand lines tend to reflect the consequence of early flexional folding in the skin of the developing hand.

For example, regarding the life line studies have indicated that a malformation in the thumb (by shape or function) typically manifests via the shape, location and path of the life line! Thus any alteration from the normal life line shape may be interpreted as being secondary to abnormal form and/or function of the early developing thumb (or some other hand- or body part).

And researchers have found that such knowledge may be of diagnostic value in particular syndromes, as well as being of functional significance in serious malformations of the hand. However, both the 1990 study (picture above) and the 1978 study (picture below) show that length of the life line can not serve as a reliable indicator for 'longevity' and at best can be understood as a variant of a 'minor physical anomaly' (which are generally only seen in less than 3% of the population).

By the way, in the fields of palmistry it has recently become evident that success-stories about accurate predictions regarding life span typically relate to people at a very high age, people who have a life threatning disease, and people who died within months or only a few years after the prediction. Which kind of suggest that firm claims in this perspective should generally be taken... with 'a pinch of salt' (and in many regions around the world it can be recognized as a piece of folklore - often presented to foreigners visiting the country, etc).

4 - WHAT DESCRIBED CHEIRO ABOUT THE LENGTH OF THE LINE OF LIFE?


As stated before, Cheiro associated the length of the life line with the length of the natural life expectancy apart from accidents. To learn and understand his style of thinking we can study some of his related quotes from his most famous work: Cheiro's The Language of the Hand

"My theory, and one which I have proved by watching the growth of this line on the hands of children and young people, is that it rises at the base, or on the face of the Mount of Mercury, and as it grows down the hand and into the Line of Life, so does it foreshadow the growth of the illness or germ of disease which at the time of its coming in contact with the line of live will reach its climax. I wish to call special attention to this point; also to another, namely, that the Line of Life merely relates to the length of life from natural causes, but if the hepatica is as strongly marked as the Line of Life itself, their meeting at any point will be the point of death. Also, no matter how long the life line may seem to be, any abnormal development of the line of health will cause the death of the subject."

"THE LINE OF LIFE:

What we know as life it but existence,
A waiting-place, a haven by the sea,
A little space amid immeasured distance,
A glimpse, a vista, of that life to be.


Obviously, Cheiro's additonal revelations were not included in the British research. One may wonder how the results would have been if the corrected lifeline length measurements (RLL/max and LLL/max) were also corrected for Cheiro's additional suggestions for the prediction of an unnatural cause of death.


5 - CHEIRO'S HANDPRINT: HOW LONG WAS HIS LIFELINE?


Cheiro presented his own handprint in his famous 'Cheiro's language of the hand': see the picture below!

(For your information: Cheiro presented only the palmprint of his right hand in his books)


Interestingly, Cheiro's life line is clearly visible on the print - which provides us the opportunity to make a 'life line analysis':

The handprint indicates that Cheiro's life line starts out outside of the palm (between the thumb and the index finger), while his life line appears to end at a point close to the border of the lower quarter of the mount of Venus (tenar). The first bracelett (racette) in his wrist is just visible on the print (only a few mm's from where the printet area of his palm ends).

NOTICE: Cheiro did not have an interruption in his life line (but he did have a 'splitting life line' - the potential effect of that aspect is not clear).


Now, take a look at Cheiro's palmprint & read further below... 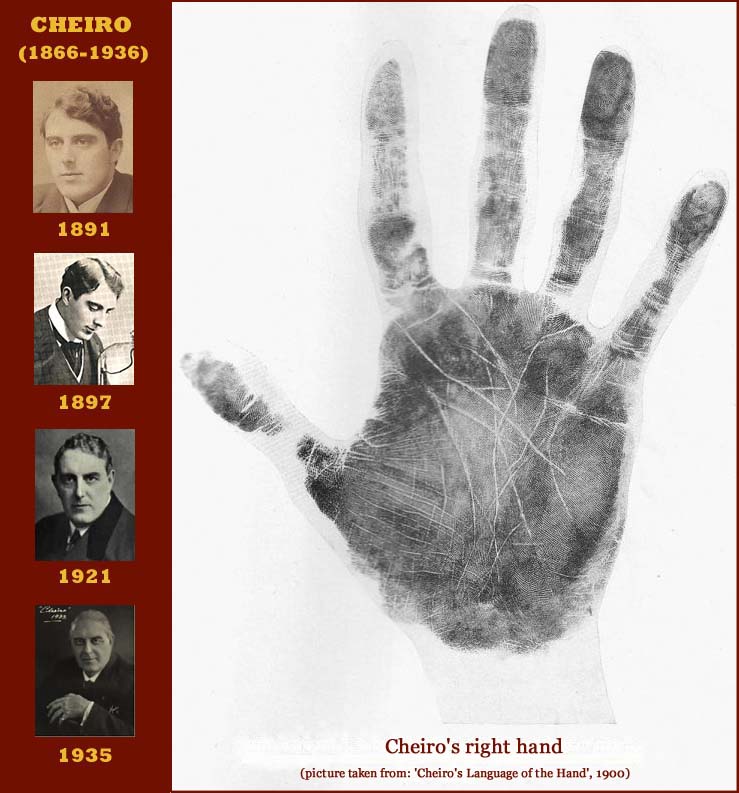 Cheiro's handprint: how long is his 'Line of Life'?


When using the measurement method described in the 2th paragraph of this article, one could find that Cheiro's 'CORRECTED LIFELINE RATIO' is close to: 0.82 (= RLL/max).

The inclusion of that result in the formula presented by the researchers gives:


CONCLUSION:
Cheiro (1866-1936) died at age 70 - about 10 years later than indicated by the length of his lifeline.
So likely, we can safely conclude... that Cheiro outlived the length of his own 'Line of Life'!

(Which sort of confirms again that the life line in an individual is not a reliable indicator for the person's 'life span'!)

This article presents confirming reassurence for readers (and other people) who discovered that the length of their 'Line of Life' is rather short: because even the 'Godfather of palmistry' lived longer than indicated by his theory... and the length of his life line!

PS. The same can be said about the majority of the people included in the British sample: almost 60% of those outlived their 'Line of Life'.

SOURCES:
• FULL ARTICLE: 'Relationship between longevity and lifeline: a manual study of 100 patients.'
• BUY AT AMAZON: Cheiro's The Language of the Hand

LEARN MORE ABOUT THE OTHER PRIMARY LINES: