Initially the Sydney line was only recognized as a very long 'head line' [in medical vocabulary:
the 'proximal palmar transverse crease']. Later, researchers found that both the Sydney line and
the simian crease relate to a set of medical & psychological problems, including: Down's syndrome, Alzheimer dementia, leukemia, and psychological developmental problems! 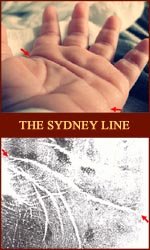 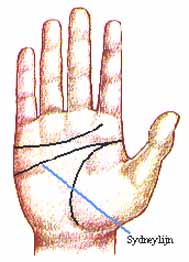 In 1967 a study was published which pointed out that next to the 'notorious' simian line, another palmar line variant is related to Down's syndrome. In this Belgian study (Vrydagh-Laoureux, 1967) this line was described as an 'extended proximal palmar crease' - in the traditional palmistry vocabulary this line is often described as: an 'extended', or very long head line.

One year later some Australian researchers (Purvis-Smith & Menser, 1968) found that this fascinating palmar line is also frequently found in the hands of patients with congenital rubella - from that point the line was, somewhat chauvinistically,
called: the Sydney line!

The hands of most people are characteristed by 2 independent hand lines: the so-called 'heart line' and 'head line' are separate; both palmar lines do neither extend clear across the full palm (see the left example in the picture below).

An important variant is found when both lines are 'replaced' by one single line which extends the full palm: the famous 'simian line' (or 'simian crease') - often this line appears to be sort of a merger between the 'heart line' and the 'head line' (see the center example in the picture below).

A second important variant is found when in the center of the palm a ' head line' (lower transverse crease) is present which crosses the full palm - however the big difference compared to the 'simian line' is that in this variant a seperate 'heart line' is not missing! Purvis-Smith defined the Sydney line as follows:

"A sydney line occurs where the proximal transverse crease
extends beyond the midline axis of the fifth finger towards
the ulnar border of the palm." (Purvis-Smith, 1972)

This implicates that the earlier researchers found that when a 'head line' is very long, but doesn't rearch the actual SIDE of the palm, it still can be recognized as: a 'Sydney line' (see the right example in the picture below).

Various alternative names are being used to describe the 'Sydney line':

Quite a few studies have confirmed the significance of the Sydney line in the perspective of various medical problems:

The first study which described the significance of the Sydney line in Down's syndrome (trisomie 21) was already mentioned above: Vrydagh-Oaoureuz described in 1967 that the extended proximal transverse palmar crease was noted in Belgian mongols (in daily language this word is sometimes used for people who have Down syndrome). Over time various studies have confirmed this Belgian findings (Purvis-Smith, 1972; Deckers, et.al., 1973; Borbolla, et.al., 1980; Shiono & Azumi, 1982; Rajangam, et.al., 1995)

The significance of the Sydney line in childhood leukemia was first described by Menser & Purvis-Smith in 1969. Confirming evidence is found in a Dutch study presented by Oorthuys, et.al. (1979).

• The Sydney line & Alzheimer dementia (gene is on chromosome 21)

The significance of the Sydney line in Alzheimer dementia was first described by Weinreb (1985, 1986). A few years later this finding was confirmed in a Alzheimer familie study of Durham in 1988 - in that study the Sydney line was found in over 10% of Alzheimer patients, while in the control group less than 1% had a Sydney line. Also confirmed in a study by Okra Podrabinek, et.al. (1988) - a bilateral Sydney line (present in both hands) appeared to the most significant hand feature for Alzheimer dementia... AND Down's syndrome! And the female sample in a study presented by Luxenberg, et.al. (1988) also included more Sydney creases than in the controls. 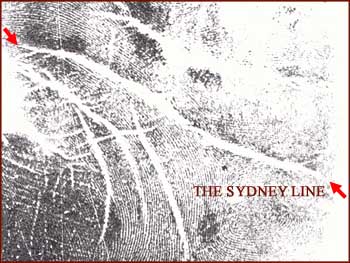 Example of the Sydney line presented by Purvis-Smith (1972). 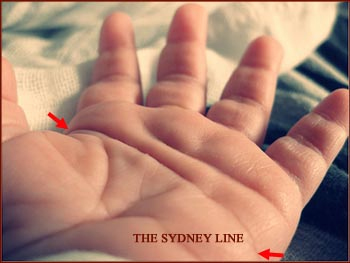 Example of the Sydney line in the hand of an infant. 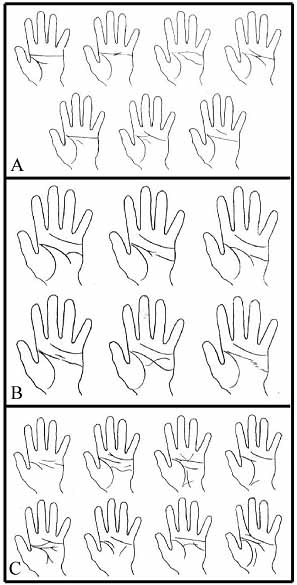 Examples palm crease variants, for: the simian crease (A), the Sydney line (B), and 'types C' lines (C).

Next to the studies in Down's syndrome (which is usually combined with mental retardation), quite a few studies have confirmed the significance of the Sydney line in the perspective of various psychological problems:

The first study which described the significance of the Sydney line in the perspective of developmental problems was prented by Johnson & Opitz in 1971. Two years later they presented the confirming evidence (Johnson & Opitz, 1973) - including various diagrams which present some relatively common variations for: the simian crease (figure A), the Sydney line (figure B), and the category of other abnormal lines (which can not be described as a simian crease nor a Sydney line) 'types C' lines (figure C).

The figure on the right illustrates the non-specificity of the abnormal creases.

In the 70's a few more studies provided confirm evidence for Johnson & Optiz's findings, via studies focussed on: hyperactive children (Lerer, 1977 - the Sydney line appeared to be a more signifanct feature compared to the simian crease), and Williams-Beuren syndrome (Rodewald, et.al., 1994).

Some additional info about this topic is presented in the section 'psychology' in the handresearch course: 'scientific palm reading'.

Resuming some info presented earlier in this article: today, Alzheimer dementia and leukemia are known as some of the most common health problems related to Down's syndrome. There appears to be a link between those 3 medical problems (Down's syndrome, Alzheimer & leukemia) and the most frequently observed abnormal palmar creases: the simian crease & the Sydney line!!

Although the exact etiology of the palmar creases is not understood complete, there appears to be some consensus that related mechanisms are responsible for the development to both 'abnormal' variants.

When looking at the details presented in the studies, there appears to be some evidence that the combination of the Sydney line and a simian crease in the hands of 1 person - is likely to have a higher discriminative value.

For example: this implicates that when a person has a Sydney line in the right hand + a simian line in left hand, that person has likely a higher chance for suffering on one of the medical/psychological problems described in this article. You can find the supporting proof in the Purvis-Smith study (1972): they revealed that in a sample of 105 people who have Down's syndrome, 7 people (= 7%) had the combination of the Sydney line in one hand, and the simian crease in the other hand - while none of the 500 controls had this combination!!!

Be aware of some fundamental differences in the prevalence of the Sydney line and the simian crease:

• The right-hand vs. left-hand differences: a Japanese study revealed that (especially in men) the Sydney line is more often observed in the right hand (confirmed by 7 out of 12 right-left comparisions in: Shiono & Azumi, 1982); while the simian crease is known to be found more frequenty in the left hand (1.3% vs. right hand: 0.8%).

The Sydney line and the simian crease are the only palmar creases listed in the so-called "Mèhes Scale" (which is an important list of 57 'minor physical anomalies').


7 - OTHER INTERESTING RESOURCES ABOUT THE 'SYDNEY LINE'

Some of the hand reading experts in the Global Hand Reader Network have presented interesting contributions on the Sydney line:

"The Sydney line goes by this name because it was identified by medical geneticists in Sydney, Australia. ... This line was found in young children, who could not match the learning skills of others their age. They demonstrated serious difficulty learning to read and write, and with comprehension in general. Within a few years, and without any manner of professional intervention, these children overcame this difficulty entirely. The learning gap closed and they quickly caught up with their peers. ... Many of those carrying the Sydney line manage sophisticated studies and careers. But many never seem able to rise above the impoverished image of themselves that they recorded as children, and which they sustain as a permanent reference to their worth."

• A Sydney line analysis related to the hands of: actor Michael Douglas

"Another transverse palmar crease that crosses the entire palm is the Sydney line named after the city in Australia where the scientific team Purvis-Smith and Menser first observed it. The Sydney line is the proximal (head) line and the distal crease (heart line) is also present and appears normal. Earlier reports did not consider this crease to be "significantly abnormal," but Schaumann and Alter report later studies showing increased frequencies in those with Down's syndrome, congenital rubella, and leukemia. I have one on my left hand along with a simialar extended heart line, but I seem to suffer none of the above problems. However, the principel problem observed with those having Sydney lines have been in chidren with delayed development, learning difficulties, or minor behavioral problems, which does fit my childhood reading dyslexia."

• The history of dermatoglyphics - including one comment about the Sydney line

"A line that continues straight across the hand to touch the outer Mars area on other side (known as a Sydney line) creates (like all completely crossing lines) a compulsive process. This form of the line shuts of the Lunar quadrant, so the bearer is cutoff from their inner feelings; they'll be unsentimental and have a hard edge to their personality.
Such people tend to be strong characters, mentally fixed and physically tense. Though often garrulous and talkative, the urge to be emotionally demonstrative is shut off; they can't relax, though they are great a coping with emotional difficulty. They can too easily ignore the demands of the body, instead digesting a worry of scheme. They'll easy become constipated, sleepless, or unable to eat. The Sydney line on the passive hand is related to a tough nurturing experience. It's also an indication of a panoramic mental vision but poor attention span, dyslexia, and potential child behaviour problems."

• The history of palmistry

Richard Unger has developed the IIHA system of 'Gift Markings in you hand'. One gift marking in the IIHA-system is very related to the Sydney line: gift marker 12 - 'the Hal 9000 headline' [which refers to a fictional computer in Arthur C. Clarke's movie 'A Space Odyssey' (1968), is very related].

The 'Hal headline' gift marker is described as: a very long headline - but in this case it does NOT research the side of palm (this implicates that 'COMPLETE' Sydney lines are NOT classified as a IIHA gift marker). The 'Hal headline' is said to indicate special multi-tasking capabilities, such as: an analytic brain + a talent for data collecting.

Other studies have pointed out that the Sydney line handmark also plays a significant role in:

There is also evidence that - unlike the simian line and it's variants - the Sydney line is age-dependent (especially in the first few months after being born) and is not a permanent structure of early intrauterine origin (Berger, et.al., 1983):

"Ninety-seven healthy newborns with a Sydney line in 143 palms were re-examined between the ages of 10 and 14 months. The Sydney line was no longer present at follow-up in 58.8 per cent of these infants and in 66.4 per cent of the palms. It appears that the Sydney line, unlike the simian line and its variants, is age-dependent and is not a permanent structure of early intrauterine origin."