The materials provide a solid basis for the frequently heard perception that men in general often tend to have a more 'primitive' nature compared to women!

I - Apes have very short thumbs,
males have shorter thumbs than females!

In general, one can say that the male thumb is a bit shorter compared to the female thumb. Thumb length can e.g. be determined by putting the hand on a flat surface and then by pushing the thumb towards the palm.

In my dissertation study I have studied this aspect of the hand in 30 males and 75 females. 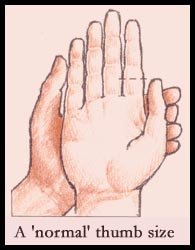 When one measures the thumbs of a few males and females one will likely notice that in the hands of the males the thumb is usually not long in both hands.

II - The 'human digital formula' (2D>4D)
is most typical for females!

The concept 'human digital formula' was introduced by Wood Jones (The principles of anatomy as seen in the hand, London: Churchill, 1930). 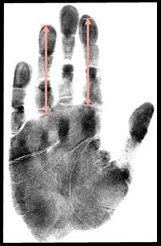 Jones discovered that in the hands of apes [Hominidae] the absolute length of the ring finger is typically much longer than the index finger: the phenomenon is being described by Wood Jones by means of the concept: the 'simian digital formula'.

The picture on the right concerns a hand displaying a typical 'human digital formula', where the index finger and the ring fingers have approximately the same length!

The figure below presents data from the dissertation study follow-up. These data indicate that the 'human digital formula' is more observed in both the right- and left hands of the studied females compared to the studied males. 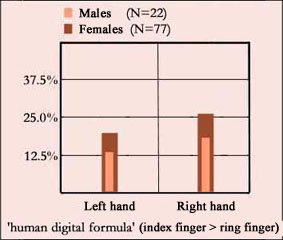 Many years later the British anthropologist John Manning (professor in psychology at Swansea University) observed similar results in many populations from different countries around the world: he notified that a longer index finger is much more frequently observed in the hands of females compared to males. Manning concludes on the back of his first book, titled 'Digit Ratio':

"... The 2D:4D ratio is the only prenatal sexually dismorphic trait that measurably explains conditions linking testosterone, estrogen, and human development; the study of the ratio broadens our view of human ability, talent, behavior, disposition, health, and fertility."

By the way, it appears that Manning didn't consider the possibility that other features of the hand may show likewise male-female differences. Nevertheless, my own research results point out that the morphological male-female differences in the length of the little finger (relative to the length of the middle finger) is actually much more significant compared to the ratio of the index finger and ring finger (= 2D:4D ratio)!!!

Interestingly, the hands of apes are known to have a long ring finger ... and a long little finger!

Finally, combined with the data on the thumb & 2D:4D digit ratio one can conclude that this tendency is actually found in all finger ratios combined! 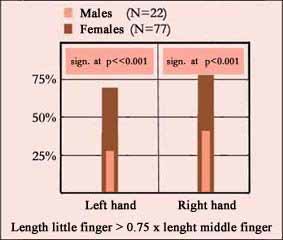 Next to body hair, fat percentage and finger ratios there are actually quite a few other rather significant phenomena which show a similar perspective:

The simian line has earned its name due to the fact that it leaves the impression of a single palmar crease a.k.a. the the so-called 'simian line', which crosses the full palm - a tendency which is also typically found in the hands of apes (simians). Interestingly, the prevalence of the simian line is generally about 50% more often in the hands of males (compared to females): detailed substantiation for this claim is available HERE.

More about the simian crease:
The Simian Line: a notorious hand crease!

The classical work of Cummins & Midlo 'Finger Prints, Palms and Soles' (1943, p.170) describes that the hands of apes show about 2 to 3 times more frequently 'complex' dermatoglyphic patterns (loops and whorls) compared to the human hand. Interestingly, Cummins & Midlo also presented in their work an overview of studies involving 16 populations around the world. The results indicate that whorls are typically more common in males (confirmed in 10.5 out of 16 studies = 65,6%); and arches are typically more common in females (confirmed in 14 out 16 studies = 87,5%).

Also, a research study presented by Schaumann & Alter (Dermatoglyphics in medical disorders, 1976, p.78-80) on 200 males and 200 females from Northern-America shows that in all fingers and all palmar zones the studied males appear to have more 'complex' patterns compared to the studied females.

More info about 'complex' patterns in the dermatoglyphics is presented in the section autism, a disorder which is known to have a higher prevalence in males than in females! 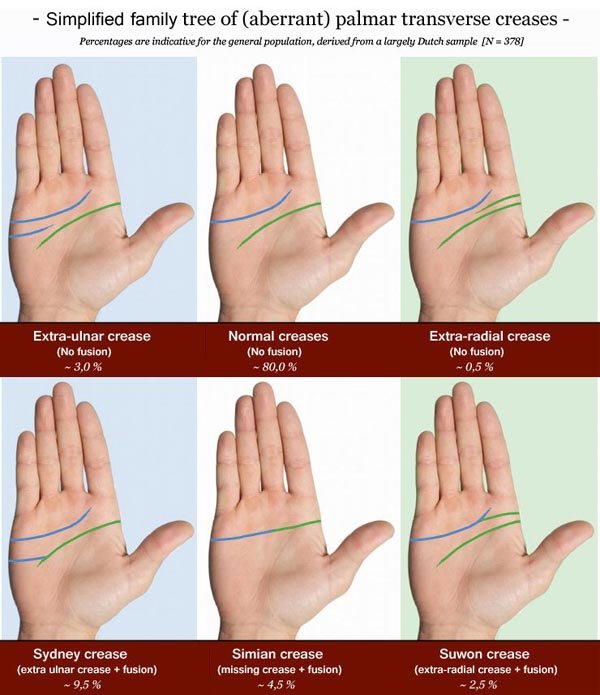 One could even argue that the full hand shape is a significant factor here! Because most ape- and monkey species show a tendency to have a relatively 'long' hand shape relative to the typical human hand proportions. Technically, this aspect can best be studied via the hand width to hand length ratio - the so-called 'hand index'.

Historically, population-level right- or left handedness has been considered a hallmark of human evolution - the debate about whether nonhuman primates may or may not exhibit population-level handedness is actually not even within sight. However, it is interesting to notice that both the tendency towards left-handedness and ambidexterity is typically more prevalent among males.

So, in a way one could argue here that some of the biological reasons why aggression gets associated to represent typical 'male-like' behavior... is reflected by the fact that males tend to have a relatively wide hand shape that is often featured with e.g. a low digit ratio, and/or fingerprint whorls, and/or a simian line, and finally even the tendency towards left-handedness and ambidexterity: males are about 3x more likely to be left-handed than females!

Next to the rather typical biological male-female differences that manifest via body hair, fat percentage (up till more than half of the female breasts involves fat), finger length ratios, the prevalence of the simian line, dermatoglyphics distributions and the full hand shape provide evidence to assume that during the evolution the female body constitution has evolved further away from the body constitution of apes - therefore it appears fair to claim that the male body clearly resembles reminds us to the 'primate' body constitution!

The combination of the following 8 hand factors can be recognized to represent an extraordinary male-like mix of (primitive) hand factors: