Discover the world of the nails:
[ The Hand Research Nail Encyclopedia ]


What is a Brittle Nail?

How to recognize Brittle Nails?

Brittle nails are quite a common problem particularly for women and there are a number of causes. Brittle nails are nails which split and break easily. Nails can be dry and brittle or soft and brittle. Brittle nails are caused by a few different factors. One commonly cited cause of brittle nails is frequent hand washing or water usage. People who clean on a frequent basis will often have brittle nails, unless they take the necessary steps to protect themselves from being susceptible to such a nail condition.


How to treat brittle nails?


There are ways to fight brittle nails and get well on your way to good fingernail health.

PREVENTION: One easy way to help prevent brittle nails is to wear gloves when engaging in activities that are rough on their hands. For household chores, such as dishes and cleaning, individuals should wear rubber gloves to protect the nails. If a person performs construction work or other types of manual labor, work gloves are a great way to keep the nails in the best shape possible.
Another way to prevent brittle nails is to maintain them on a frequent basis. By clipping and trimming the nails, the individual is helping to ensure that they are the healthiest that they possibly can be. When one has healthy nails, they will be less likely to be brittle and split or break.

An easy way to treat brittle nails it to apply lotion to the nail. There are certain nail solutions and lotions which will aid in preventing the nails from becoming brittle. Another treatment option for brittle nails is a vitamin known as Biotin. Be sure to read the label on the vitamin prior to taking it to ensure that doing so would not be detrimental to one's health. For example, pregnant women and women who are nursing should avoid Biotin.

What Causes a Dry Brittle Nail? 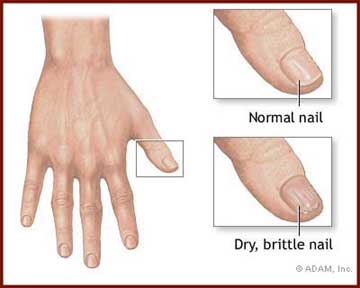