Discover the world of the nails:
[ The Hand Research Nail Encyclopedia ]


What is a Nail Fungus?

How to recognize Nail Fungus?

Nail fungus is made up of tiny organisms (Tinea Unguium) that can infect fingernails and toenails. The nails of our fingers and toes are very effective barriers. This barrier makes it quite difficult for a superficial infection to invade the nail. Once an infection has set up residence however, the same barrier that was so effective in protecting us against infection now works against us, making it difficult to treat the infection.

Yes, it can be. The organisms can sometimes spread from one person to another because these critters can live where the air is often moist and people's feet are bare. This can happen in places like shower stalls, bathrooms, or locker rooms or it can be passed around on a nail file or emery board. So, don't share them. Nail fungus may also spread from one of your nails to other nails. Fungal infection of the nails, also known as onychomycosis, is a common problem among for example Americans. It is estimated that between 2% and 14% of the population has fungal nail infections, with the frequency of such infections increasing with age. Few children have fungal nail infections, while as many as 25% to 40% of people over the age of 60 do. Fungal infections of the fingernails are more common in men; fungal infections of the toenails are more common in women.

The best treatment of course is prevention. Keep your nails cut straight across. If nails are hard to cut, soften by soaking in salt water (use 1 teaspoon per gallon of water and then dry well). Keep feet dry and well ventilated. Be careful with artificial nails and be selective about choosing your manicurist. Ask about how they sterilize their instruments. See a podiatrist or your health care provider if you see signs of fungus.

The most common examples of nail disorders caused by fungi are: onycholysis, onychomycosis, and paronychia. 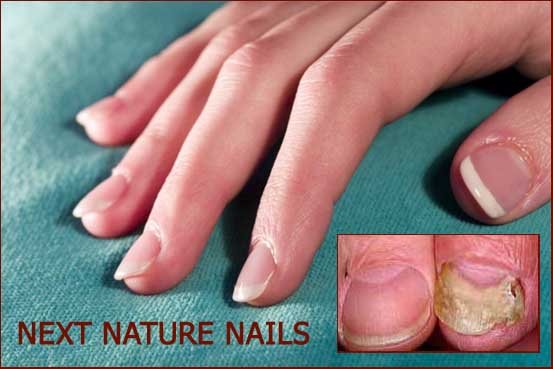 ONYCHOMYCOSIS
due to the use of artificial nails!