Most of us are happy to have 5 digits on each hand, but there are some people in the world who think otherwise. A few examples from around the world:

In the Da Silva family from Brasilia 14 out of 26 members have six fingers on each hand and foot; when they get pregnant they only want to know if the child has 5 or 6 fingers that characterizes their family with pride, and they are delighted when it has six fingers.

Devendra Suthar has in total 28 digits: 14 fingers & 14 toes; in 2015 he received with the Guinness World Record: 'most fingers and toes on a living person'.

Lisa from the UK was born with floppy thumbs, got one replaced but now she has only 9 digits left available, but she jokingly claims: "10 Fingers are way overrated!"

Polydactyly [prevalence: 1 per 1,000 to 10,000 live births] involves the condition of having more than 5 digits on one of both hands or feet. Polydactyly can occur by itself, or more commonly, as one feature of a syndrome of congenital anomalies (Wikipedia reports: "97 genetic syndromes have been associated with different kinds of polydactyly").

Oligodactyly [prevalence: rare, (far) less than 1 per 2,000 live births] is the opposite of polydactyly; this involves the presence of fewer than five fingers or toes on a hand or foot. This medical condition usually has a genetic or familial cause; only sometimes it is a sign or symptom of a syndrome. People with oligodactyly often have full use of the remaining digits and adapt well to their condition and they are typically not greatly hindered in their daily activities. Even those with the most extreme forms are known to engage in tasks that require fine control, such as writing and bootmaking as well as working as a cab driver.

Meet the Da Silva family. At the critical moment when their hands got first sculpted, they got more than the rest of us. Instead of 5 digits on each hand, they have 6. In fact, of the 26 members of the family 14 have 1 extra finger on each hand.

What some would say as a genetic disadvantage, the Da Silva family turn it into an advantage. Because their hands are bigger & wider this results in a better grip and reach - which gives Joao de Assis an advantage as a goalkeeper in footbal and Maria Morena takes the advantage while playing the piano.

- VIDEO: Why Hrithik Roshan wanted to cut his extra finger -

A few years ago Bollywood actor Hrithik Roshan was voted the sexiest man in Asia by US weekly Eastern Eye for the third time in four years - but the actor himself feels 'lucky' because he has a 'piece of ugly.'

Hrithik Roshan has six fingers on one hand, but he said that "imperfection" often make us "beautiful." Hrithik also said his double thumb irregularity was "Beautifully imperfect". He wrote on his official Facebook page on december 10, 2014:

"I am lucky. Not cause I got voted sexiest. Cause I just noticed God gave me a piece of ugly to carry with me to remind myself n others of how beautiful our imperfections make us. My thumb used to repel people in school. Today I am posting it to millions like you who I know are just like me. Beautifully imperfect. Thank you God for this wonderful life. Make your weaknesses your strength. Be proud. U are beautiful. Trust me."

The Bollywood actor who made his Bollywood debut with his father's directorial film 'Kaho Naa... Pyaar Hai' in 2000, has never made an effort to hide or even surgically remove the extra thumb. In fact in his film 'Koi... Mil Gaya', his double thumb was written into the script to highlight his bond with the alien Jadoo who also had a double thumb. His wax statue at the Madame Tussauds Museum in London faithfully includes this detail as well.

Devendra Suthar, a carpenter from from Himmatnagar (Gujarat, India) was born with a condition called polydactylism which means he was born with more fingers or toes than the average person; with 28 digits he has more digits than anyone else in the world.

People from far away come along with their children to see 'the man with seven fingers' and Devendra says he enjoys all the attention.

Three-month-old Honghong was reported to have 31 digits in an extreme case of polydactyly; the baby's parents, from Hunan (China), were trying to raise funds for his surgery. Honghong's mother also suffers from the condition (she has 12 fingers & 12 toes) and was worried about passing her genes on. 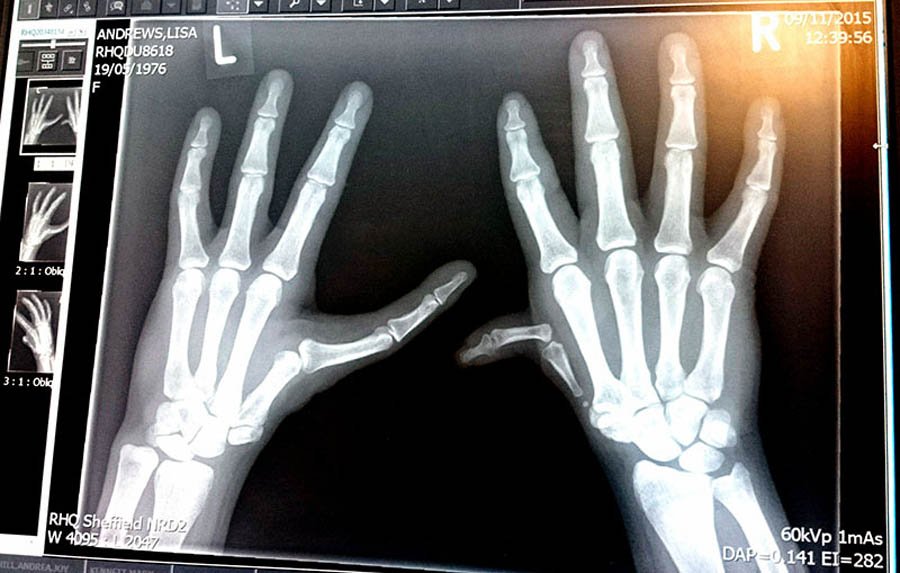 Lisa was born with floppy thumbs - bones and muscles were missing in her left thumb. Luckily, in her childhood doctors have created for her left hand a new thumb that was made from her left index finger, due to that intervention she has only 9 fingers left (see the X-ray scan above).

Technically, Lisa suffers on a condition named 'radial dysplasia' - featured with 'congenital thumb hypoplasia'. Only recently, at age 41, the genetics involved with her condition have been identified as mutations in the TBX5 gene - resulting in Holt-Oram syndrome, which is characterized by skeletal abnormalities of the hands and arms (upper limbs) combined with heart problems.

Lisa Middleton's parents were told "not to expect much" from her, but she defied the odds to become a successful self-employed hairdresser - now her clients don't even realise she's disabled. Lisa describes:

"I know when people notice my hands as I see them whisper but I'm upfront now about what happened to me and say they can take a look. Some do, others who are confronted seem embarrassed. When children see the scar on my hand, I just tell them I had my thumb made."

Lisa's life-story is a classic expression of extraordinary will-power!!!

Lee Spievak, the man who grew a finger
•

The mystery of the 5 digits