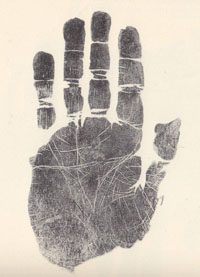 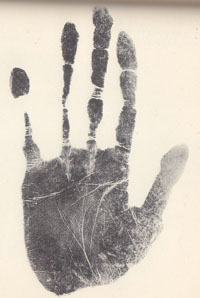 THE TOP 10 HAND SIGNS
IN SCHIZOPHRENIA:


NOTICE: Log Odds Ratios are calculated from the prevalence (%) among Schizophrenia patients & controls; more details are presented in the right column at the bottom of this page.

INTRO: About the Simian Line (a.k.a. 'simian crease')


Schizophrenia & the simian line:
the essentials!

About the role of the SIMIAN LINE (simian crease) in schizophrenia:

Actually, there is another hand sign which has higher significance on the same level [lines = level 10]: the Sydney line (hand sign 9-2)!

What's in 2014 the state of knowledge about simian lines? ..more

Schizophrenia is a rather complex psychiatric disorder, and although no single isolated organic cause has been found current research is focused on the role of the nervous system. Review studies focussed on (soft) neurological signs have indicated that primitive reflexes, motor coordination, motor sequencing & sensory integration represent the major categories. In august 2013 researchers have reported to have found a brain switch for schizophrenia between two key regions of the brain - the insula and the lateral frontal cortex.

NOTICE: Damage to the frontal lobe is known to cause 'primtive reflexes', and earlier in 2013 a brain study has pointed out that smaller left dorsolateral prefrontal lobe volume + greater primitive reflexes together predict functional outcome in schizophrenic patients.

Schizophrenia is a complex mental disorder characterized by abnormal social behavior and failure to recognize what is real (typically manifesting as: delusions, hallucinations and disorganized speech), which is typically featured with 'minor physical anomalies' combined with 'neurological soft signs'. According Multi-Perspective Palm Reading schizophrenia is described to become manifest in at least 4 out of the 5 major perspectives of the hand (key-words for the 5 major perspectives are: function, proportion, skin, palm & fingers; the role of the proportion perspective is least obvious in schizophrenia). This article presents an overview of 47 individual hand signs significant for schizophrenia.

The hand sign statistics reported in this article indicate that schizophrenia usually tends to become manifest at 2 minor levels: the skin-related level of the (major) lines/flexion creases & the function-related level of the hand motorics. Additionally, a minor role is often seen regarding multiple abnormalities at the level of the finger shapes and/or the dermatoglyphics. The hand zones that typically get involved are: the fingertips & the pinky finger; for the palm no specific zone is more significant than the others.

1) Dermatoglyphics of Schizophrenics. A. Bagga, 1989

8) Further evidence for anomalies in the hand-prints of patients with schizophrenia: a study of secondary creases. M. Cannon, et al., 1994

17) Minor Physical Anomalies in Schizophrenic Patients and Their Siblings. B. Ismail, et al., 1998

30) The specificity of neurological signs in schizophrenia: a review. M.P.M. Boks et al., 1999

33) Biometric parameters of the hand as an index of schizophrenia - A preliminary study. E.Z. Shamir et al., 2013

34) Subdomains Within the Negative Symptoms of Schizophrenia: Commentary. B. Kirkpatrick & B. Fischer, 2006

35) Subdomains Within the Negative Symptoms of Schizophrenia: Commentary. T. Brill & S. Stier, 1999 (None of the 12 hand signs are listed so far)