Why a cancer patient may have no fingerprints:
THE HAND-FOOT SYNDROME!

In december 2008 a 62-year old cancer patient from Singapore was held for four hours by immigration officials in the United States because they could not detect his fingerprints. The patient went for visiting US relatives, but the doctor of the patient had to declare that his patient's fingerprints disappeared because of a cancer-drug he had been taking for over three years. Losing fingerprints is a rare characteristic of the so-called 'hand-foot syndrome'.

This syndrome is usually caused by chemotherapy, and characterized by various skin reactions that occur when a small amount of the medication leaks out of capillaries, usually on the palms of the hand or on the feet. 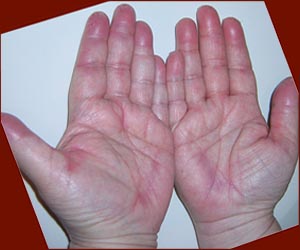 Last month (april, 2009) a Singapore-based medical oncologist reported a letter that was presented online in the journal 'Annals of Oncology', titled: Travel warning with capecitabine. The trade name fot the cancer medicine capecitabine is 'Xeloda' - a medicine that is often prescribed in patients with breast cancer and colorectal cancer. But the oncologist's patient had been using the drug to treat his nasopharyngeal cancer.

Two years ago, Spanish cancer doctors reported a likewise story about the 39-year-old flight attendant Cheryl Maynard detained for several hours at a U.S. airport until her doctor faxed an explanation that the capecitabine she'd been taking for breast cancer had erased her fingerprints.

THE 'HAND-FOOT SYNDROME' & LOSS OF FINGERPRINTS:

The photo at the top of this article presents an example of the 'hand-foot syndrome' (HFS), a.k.a. Palmar-Plantar Erythrodysesthesia (PPE), or 'aseptic dactylytis'. This syndrome manifests usually as a side effect of some types of chemotherapy.

The 'hand-foot syndrome' occurs relatively often among capecitabine patients (and is also relatively often seen in e.g. psoriatic arthritis, sickle-cell disease, tuberculosis, and leprosy). One 2004 study, published in the Journal of Clinical Pharmacology, found that 65% of patients in clinical trials of the drug developed hand-foot syndrome - about 5% had a (severe) grade 3 condition.

The loss of a fingerprint is in this syndrome the result of the peeling/flaking of the skin, which belongs to the less common side-effects of the 'hand-foot syndrome'

BASIC CHARACTERISTICS OF THE 'HAND-FOOT SYNDROME':

The basic symptom of the hand-foot syndrome is a chronic inflammation of the palms or soles of the feet.

Often this basic symptom is accompagnied with several other characteristics, including: numbness, tingling, burning, or itching sensation, redness (resembling a sunburn), swelling, discomfort, tenderness, and rash.

In severe cases of hand-foot syndrome you may have: cracked, flaking, or peeling skin, blisters, ulcers, or sores appearing on your skin, intense pain, and difficulty walking or using your hands.

OTHER CAUSES FOR HAVING NO FINGERPRINTS?

Problems with identifying fingerprints happen much more often than most people would expect. For, in about one in 50 people the lack matchable fingerprints occurs.

Since only a few years Naegeli Syndrome and Dermatopathia Pigmentosa Reticularis (DPR) [both are caused by a specific defect in the Keratin 14 protein] are known as the most important causes of being born without fingerprints. This disorder is often inherited through several generations of families.