Finger Length & Sexually Dimorphic Facial Characteristics
Research indicates that high (feminine) values of 2D:4D were associated with feminine facial characteristics in women, but not in men

Research reported from The University of Liverpool & Stirling University - The second-to-fourth-digit ratio (2D:4D) may be related to prenatal testosterone and estrogen levels and pubertal face growth. Several studies have recently provided evidence that 2D:4D is associated with other-rated facial masculinity and dominance, but not with facialmetric measures of masculinity.

We found that localized face shape differences, shown here to be sexually dimorphic and related to ratings of dominance, were associated with direct and indirect measurements of 2D:4D.

Finally, 2D:4D measurements were made using three different techniques. High (feminine) values of 2D:4D were associated with feminine facial characteristics in women, but not in men. It was concluded that certain aspects of facial development are governed by factors that are established prenatally.

These aspects may be associated with perceptions of the self by others that are important in the social environment, particularly in terms of intra-sexual competition and mate acquisition. 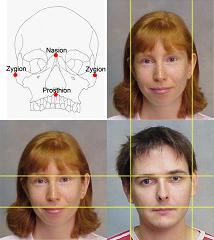 Adult males have shorter upper faces, for their width, than females do, researchers found. This male face is wider, as apparent from the yellow vertical lines when he is compared to the face above. Yet the upper facial height is about the same, as is evident when comparing him to the face left of him. The researchers placed the yellow lines against facial reference points known as the nasion, zygion and prosthion, shown at upper left.