Talk to the Hand
Who are today's finger measurement celebrities?

We may be in the golden age of finger celebrity. Last week, we looked at the work of Professor John Thomas Manning of the University of Central Lancashire, the leading figure in finger-length ratio. Today we consider several other high achievers. Like Manning, they specialise in comparing the length of a person's second (index) finger with the length of their fourth (ring) finger. They call this "the 2D:4D ratio". 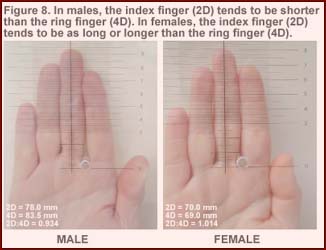 Emma Nelson, a graduate student who sometimes works with Manning, has begun a series of finger-related studies. One examines the 2D:4D ratio of hand outlines stencilled on cave walls. Nelson hopes 2D:4D will show whether the hands belonged to ancient men or women. Another study uses finger-length ratio to better understand the topic Testes Size and Dominance in a Group of Captive Chimpanzees.

Martin Voracek of the University of Vienna (profiled in this column earlier this year) takes a great interest in fingers. He collaborates with Manning, and also does research independently.

Voracek and Manning recently reported that, by measuring a man's 2D:4D, they could predict, to some degree, how many sexual partners he would have. But they say this works for heterosexual men only. And, so far, they are only confident that it applies to Austrian men. Voracek and Manning have also published a report on the perhaps inevitable question of whether the finger-length ratio is related to the length of the penis. Yes, they say, it is.

Together with colleagues, Voracek has done another study on how 2D:4D relates to the performance of skilled fencers.

Meanwhile, S. Marc Breedlove, a professor of neuroscience at Michigan State University, has become a giant of finger research. In 2000, his study, Finger-length Ratios and Sexual Orientation, appeared in the journal Nature. It features a handy graph. The reader can see that, on average, gay and straight women have distinctly different finger ratios - and gay and straight men have differing ratios, too. These distinctions, curiously, are true of the right hand or of the left, but not of both.

Breedlove made a more specific discovery two years later. He and several colleagues published a study called Differences in Finger-length Ratios Between Self-identified "Butch" and "Femme" Lesbians. Their findings are summed up in this sentence: "We surveyed individuals from a gay pride street fair and found that lesbians who identified themselves as 'butch' had a significantly smaller 2D:4D than did those who identified themselves as 'femme'."

Mark Brosnan, a psychology researcher at the University of Bath, may be the most notorious finger celebrity. He studied the fingers of 100 of his colleagues at the university, and reported a significant difference in the digit ratio of science teachers compared with those teaching humanities or social science. No one has tried to dispute this finding.


Related sources:
How the index finger & ring finger relate to financial success
A secret your finger length reveals
Basketball fingers, colonic enemas, and fat
Talk to the Hand at The Guardian
Double Digits
Giving science the Finger
Finger Length (2D:4D) moderates the impact of an aggressive music video on aggression
Length of Fingers show how 7-year-old children will do at maths or English
Pointing a Finger at sports success