The Hand of Hillary Clinton
'Hillary will win, it's in her hands' - writes an Hand expert.

If the eyes are the mirror of the soul, the hands are the mirror of character and personality of an individual. The Indians have understood this correctly. The most ancient texts dating from the ancient doctrine palmistry Vedic Hindu literature. As well as the Chinese, who orally tramandavano the edge, the Arabs, the ancient Romans and Alexander the Great, who came up in India, then commissioned studies on divination.

Chirology - the discipline that seeks to read the character of individuals through the study of the meanings of lines, signs and shape of the hand and fingers - it also speaks in the Bible or. Even better yet, Aristotle has examined one of the philosophical chirology sciences (chirosofia: kbeir = hand, and sopbia = wisdom) as one of the main methods to know oneself.

For centuries hand reading was, however, often subject to prejudice and tied the occult world (under the name palmistry, understood as divination art). Today modern science considers the hand as a valuable tool not only for understanding the psychological characteristics of a person, in some cases: to prevent/treat certain diseases, and to resolve police investigations. That brief but necessary premise, we will now take look at the hands of Hillary Clinton, presidential candidate in the USA.

Hillary was born in the astrological 'water sign' Scorpio, on October 26, 1947. However, the shape and lines of the hand, which presents characters typical of those practices - palm square and not too elongated fingers, while the lines are few and well delineated - more closely to the 'earth type'.

First we take a look at the life line (1 - see the picture below). It is long and well recorded. This means that inherited from her parents considerable physical strength and morals, and she owns a strong and healthy physic.
The head line on the left hand, joined the heart line, creating the so-called 'simian line' (2 - see the picture below). This means that Hillary has a sharp mind and she does not share her true emotions easily. She has the ability to cushion the blows and stress without suffering damage. 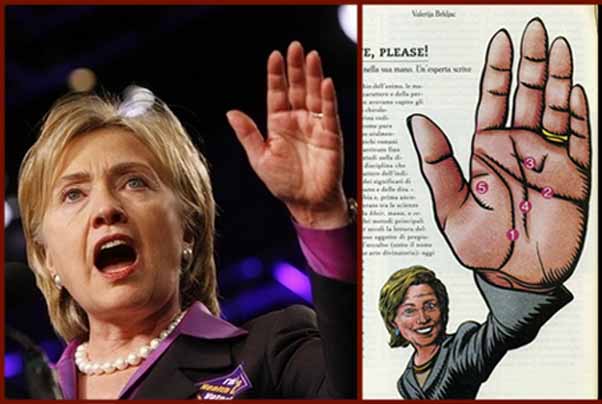 However, when looking at the right hand: the line of heart is strong and smooth - there are cuts or branches - which testifies to a certain emotion, despite trying to mask.

Hillary is therefore a sensible person and a motivated, strong personality - which many define wrongly. However, male-like - as if being logical - a certain pragmatism and a strict attitude prerogatives were exclusively for men.

Above the Simian line in the left-hand, she has the 'Girdle of Venus' (3 - see the picture above), That in a sense resembles the heart line, so is the vast area that this line covers. This line reveals that Hillary has a sexual appetite not indifferent.

Looking then at their hands in movement, you can notice that Hillary takes every opportunity to open her palms and she turns with her front body to the public. Certainly a positive attitude - confirmed by that Simian line - where flows represented by a head line of to the heart line, a uniting testify capacity towards any kind of stress that comes from communication. It seems she is almost able to 'load' through the contact with others, simultaniously - and without losing their energies.

The line of destiny (4 - see the picture above), a line which not all humans have (and whether there is, it is often short). In Hillary's hand this line is present from the bottom of the palm and ends under the middle finger on both palms. Having this line of fate which rides through the palm, combined with the index and ring of the same length, this means that we are facing a woman with considerable physical quality, mental, moral and emotional, and she is able to carry out any type of work or commitment.

To continue on this. Her hands show everything she has and that is, even the aggressiveness (Mars Superior. 5), this is the envy of Bush + Obama putten together.

The thumb and seconded from the little finger to impose on others. The little finger, which is long, says that the communicative ability is among its strong sides. Especially, the index is the same length as the ring finger: is shows she is reliable and balanced.

In chirology the colour of skin of two Democratic candidates has no importance, a hand white or black hand makes no difference. What matters is the shape and lines. The analysis of her palms tells us that Hillary has the ability, unlike her opponent Obama, to be concrete: she does what she says. You can vote for Hillary, at least from the point of view provided by Chirology.


About the author Valerija Brkljac:

Valerija Brkljac (native: Serbian) graduated in the 'Theory and History of Comparative Literature' (1983 Beogradski Univerzitet). In Italy, she has published several books on hand reading (Read the hand, 2001, Baldini Castoldi & Publisher). At present, she is writer and journalist, alongside that of teaching chirology - a passion that has turned into a job and scientific research.