The word that seems to be most closely associated with Senator Hillary Clinton is Polarizing. According to Lanny Davis, writing in The Hill's Pundit Blog, a Google search on "Hillary Clinton" and the word "polarizing" returns 1,260,000 hits, far more than you would get if you paired that word with the name of any of other presidential candidate.

A look at Hillary Clinton's palm goes a long way in explaining why people either love her or hate her. Take a look at Hillary's hands in this photo. Her right palm clearly shows two horizontal creases, a head line and a heart line. Her left hand, however, has only a single crease across the palm. In the diagram on the left, the palm on the left shows a typical hand with clearly defined head and heart lines.

If you look at your own palm, there is a 98% chance that your hand looks something like that first diagram. The palm on the right (her left hand) shows a single crease, known in both medical and palmistry circles as the Simian Crease. The Simian Crease was named after the single transverse crease found in the palms of apes and monkeys. It is commonly found in the hands of people who have Down's Syndrome or other genetic abnormalities.

(Please note that I will not publish any comments that include juvenile remarks about Senator Clinton and monkeys - disabled persons, don't even try it!) 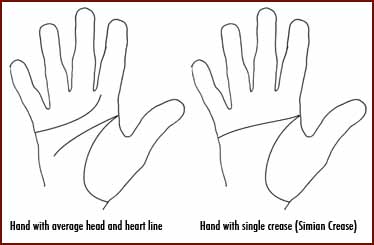 However, there are a small number of people who are born with the single transverse crease (statistically, less than 3%) who are genetically normal. For these people, the Simian Crease is a sign that they are intellectually gifted. 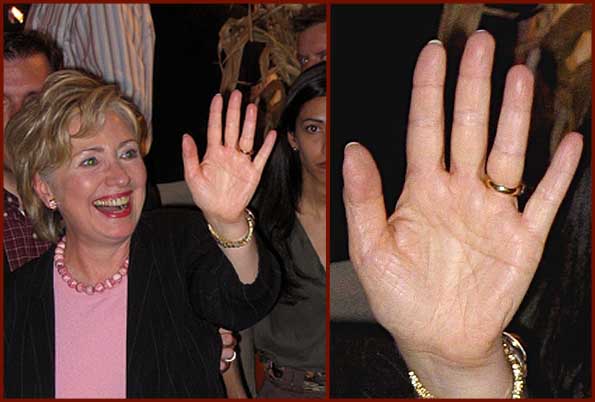 In the language of the hand, the Simian Crease is a fusing of the head and heart lines, and as such, a fusing of the thinking and feeling functions. It is usually the thinking function that dominates. Persons with the crease in one or both hands possess single-minded focus and inner intensity. Because of this, they often feel misunderstood. It is only when these persons learn to slow down a little and become aware of their differing communication style that the gift can emerge.

As can be seen in the closeup above, Hillary Clinton doesn't have a classic Simian Crease. It does not extend the full width of her palm. She also has a partial head line extension that curves downward into her Mound of the Moon. However, there is clearly a fusing of the head and heart lines. (See diagram below).


The single crease in Senator Clinton's hand may explain why she has been saddled with the reputation of being divisive. People with this gift can appear driven and may experience the world as more black and white than the average soul. Add to that an ultra long index finger which shows powerful ambition, and you can easily understand why Hillary hating has taken on a cult-like fervor.
Does this mean that Hillary Clinton has no heart? Other factors in her palm clearly indicate that she does.

Sitting above Hillary's merged Head/Heart Line is a clearly etched curve known as the Girdle of Venus. Often referred to as a sister line to the Heart Line, the Girdle is a marker of sensitivity and heightened awareness of life's subtleties.
With such a distinct Girdle in her palm, Senator Clinton not only feels, she feels deeply. When combined with a merged Head/Heart Line, the challenge of finding positive ways to communicate her feelings becomes even more complicated. 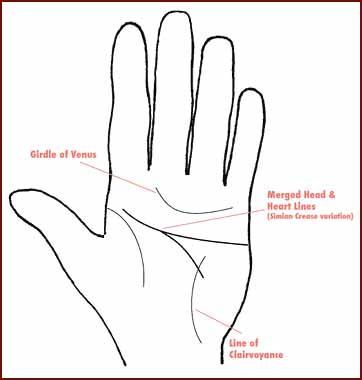 A vertical curve appears on the outer edge of Senator Clinton's palm, adding to the overall challenge. This line has traditionally been called a Line of Clairvoyance, but it doesn't necessarily indicate psychic ability as much as it does life Wisdom with a capital W. This line is a mark of right-brain driven knowledge, the kind that develops when life experience is combined with deep introspection, and it is another marker of giftedness. It's clear that there's more to Senator Clinton than meets the eye. Perhaps the public was given a tiny glimpse of the "real" Hillary Clinton when she got teary eyed at a New Hampshire press conference.

In the end, her focused and driven Simian Crease won out and she was able to quickly regain her composure. The pundits are divided on whether this helped her campaign or hurt it.

Does Hillary Clinton's palm indicate whether she would make a good president? It's a mixed bag. Her gifts of insight, empathy, focus and passion are clearly etched in her palm, but she seems unable to integrate her softer side into her public persona. The lack of a clear fate line confirms the difficulty she faces in allowing her true gifts to shine. Like many women in positions of power, she is criticized for being too masculine, but not allowed to be at all feminine.

Hillary's thumbs (will power and the ability to make things happen) are weak. She holds them too close to her palm for true take charge success, and their tips are looking a bit flat, a sign that she may be exhausted. (Tears, anyone?) No one, male or female, should have to contend with the level of vitriol that has been directed at Senator Clinton. As the first serious woman candidate for president, Hillary Clinton has taken on a pioneering role, and with it a heap of psychic and emotional abuse.

Perhaps it is part of her karma to change the way the US looks at strong women. But in order to stop being seen as polarizing, Hillary must integrate her own polarly opposite strengths and allow all of herself to show up on the campaign trail.


About the author Leslie Zemenek:

Leslie Zemenek is a Hand Reader and Karmic Astrologer with a practice in Victoria, British Columbia. She consults with clients all over North America, helping them understand and work through past life patterns and experiences. Her readings are heavily influenced by mythology, alchemy and the Kabbalah. She teaches workshops in The Art of Reading Hands and Journeys on the Tree of Life..