Language might have evolved from Hand Gestures
Talk to the Hand: Researchers speculate about how prehuman species developed
the capacity for complex language.

Chimpanzees and bonobos can communicate with greater flexibility using hand gestures than they can with facial expressions or vocalizations, new research shows. Their use of hand motions to convey different meanings in different circumstances suggests that gestures may have played an important part in the evolution of language. 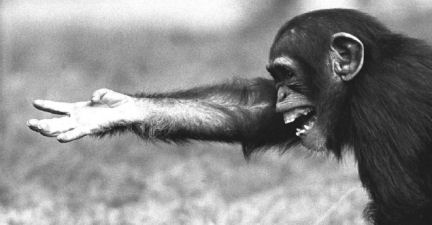 REACHING OUT. This hand gesture can mean either "I would like some of that food",
or "Please help me," depending on the context.

Researchers speculate about how prehuman species developed the capacity for complex language. One theory suggests that humans' apelike ancestors first communicated through gestures. Once the neural circuits for gesture-based language had evolved, those same brain areas could have switched over to verbal communication. Indeed, research has shown that modern apes use the same area of the brain to interpret hand signals as humans use to process spoken language.

Working at the Yerkes National Primate Research Center in Atlanta, Frans B.M. de Waal and Amy S. Pollick observed communications among 34 captive chimpanzees and among 13 captive bonobos, also known as pygmy chimpanzees. The researchers logged every hand gesture, facial expression, and vocal cry that one animal directed at another. They also noted the social context - playing, grooming, fighting, having sex, eating, and so on - in which each signal occurred.
Individual facial expressions and vocalizations were closely tied to a single context, showing little flexibility in meaning or usage, the scientists found. But the apes could use the same hand gesture in multiple contexts, the team reports online and in an upcoming Proceedings of the National Academy of Sciences.

For example, reaching out with an upturned palm while eating appeared to be a request for more food, but in fighting situations, the same gesture signaled a desire for support.

"Gesturing is a stepping-stone toward symbolic communication," in which the form of the signal bears no relation to its meaning, says Pollick, now at the Washington, D.C.-based Association for Psychological Science. Using a gesture to convey a meaning that varies with context implies a capacity to redefine signals. "There isn't such a strict connection between a gesture and an emotional context as there is with [an ape's] scream," Pollick says.

Bonobos and chimpanzees are the two closest evolutionary cousins to people. The human lineage diverged from the bonobo-chimpanzee lineage about 6 million years ago, and the last common ancestor of bonobos and chimps lived about 2.5 million years ago. Any similarities in how the two ape species use hand gestures were probably inherited from that common ancestor, giving scientists a window into the past.

"I think this is the best kind of evidence that you'll find" for how language evolved, comments Susan Goldin-Meadow, who studies human gesture and language at the University of Chicago. Fossils reveal almost nothing about how people's distant ancestors communicated, so scientists can infer the past only by looking at modern humans and other primates, she says.

For example, all apes use hand motions to communicate, but monkeys and other animals don't. And gestures are ubiquitous in human communication. "In every single culture, we gesture as we talk," Goldin-Meadow says.

Scientists don't agree on whether and how gestures influenced the evolution of language. For example, Goldin-Meadow suggests that hand motions could have developed in parallel with vocal sounds rather than coming first.


Patrick L. Barry is a science journalist from Washington D.C.