The Fingerprint of Leonardo da Vinci
Leonardo da Vinci may have had an Arab heritage, according to Italian researchers who have isolated and reconstructed the Renaissance master's fingerprint. The fingerprint represents the only biological trace of the Florentine genius, said Luigi Capasso, an anthropologist at Chieti University. 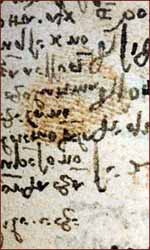 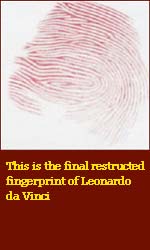 "It is actually the first evidence of Leonardo's corporeality," Capasso told Discovery News.

Indeed, nothing is left of the painter, engineer, mathematician, philosopher and naturalist. The remains of Leonardo, who died in 1519 in Amboise, France, were dispersed in the 16th century during religious wars.

The research began in 2002, following the discovery of hundreds of fingerprints in the master's notebooks and drawings. "Not all belonged to Leonardo. There was a mixture of traces, with marks also left by his apprentices," said Alessandro Vezzosi, director of the Museo Ideale in the Tuscan town of Vinci, where the artist was born in 1452 and where the fingerprints are collected. Capasso and colleagues at the University of Chieti first worked on isolating and extracting the real Leonardo's fingerprints.

Through nondestructive spectrometry, they examined about 200 fingerprints from about 52 papers and found that only in a few cases had Leonardo left a complete fingerprint. In most cases, the partial fingerprints consisted of the radial half of the left thumb, indicating that left-handed Leonardo was just moving and leafing through the papers.

"But when we examined the 'Portrait of a Lady with an Ermine', we noticed that the artist used his finger when applying the finishing touches to the necklace's shadow," Capasso said. After scouring manuscripts and notebooks, the researchers found two other fingerprints that matched and completed the Ermine markings. The result was an entire fingertip, possibly belonging to the left forefinger.

Fingerprints are unique and don't change over a lifetime. Analysis of the skin's arches, loops and whorls - a science known as dermatoglyphics - has shown that there is a link between fingerprints and populations.

In the case of Leonardo's fingertip, patterns and ridges pointed to the Middle East, the researchers concluded.

The discovery would support Vezzosi's claim that Leonardo's mother was not a local peasant girl as previously thought, but a Middle Eastern slave. According to Vezzosi, records unearthed in Vinci offer substantial evidence that Leonardo's father, a craftsman called Ser Piero Da Vinci, owned a Middle-Eastern female slave named Caterina.

"It was common in 15th century Tuscany to own slaves from the Middle East," said Vezzosi. Indeed, in 1452, the same year of Leonardo's birth, a law was passed in Florence that gave slave owners greater rights over their slaves.

Shortly after the law was passed, Ser Piero married Caterina off to one of his workers. The woman had just given birth to a boy called Leonardo. Pictures and details of the dermatoglyphic study will be shown on Sunday at an exhibition at the museum of history of biomedical science at Chieti University.