What Does Your Handshake Say About You?
The 10 worst ways to shake it 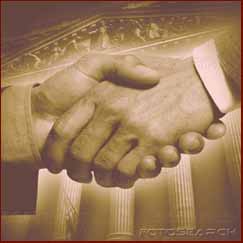 Have you ever shaken someone's hand and in the same instant, felt every bone in your fingers and palm shatter? Or, even worse, felt like you were shaking the fin on a dead fish?

Handshakes have been around since the birth of civilization. In fact, they were originally a way to prove you had no weapons in your hand when meeting someone new (given today's state of affairs, that might not be a bad idea). Nowadays, we use handshakes in meetings, greetings, offering congratulations, closing a business deal or sometimes just to say, "How's it goin'?"

No matter the basis of your handshake, it should become part of your repertoire. Handshakes are a sign of trust and help build strong relationships. Imagine meeting a well-groomed, well-dressed expert for the first time - but when you shake his/her hand, you feel like you're grabbing an infant's finger.

Prospective employers said they're more likely to overlook visible body piercings and tattoos than an ineffective handshake, according to a 2001 survey of human resources professionals. Plus, when you shake hands with people upon meeting, they're two times more likely to remember you than if you didn't shake hands, according to a study by the Incomm Center for Trade Show Research.

The time has come to find out if your grip is powerful, pathetic or just plain bad. Pamela J. Holland and Marjorie Brody, workplace/career experts and co-authors of "Help! Was That a Career Limiting Move?" say it's time to practice.

To evade making a bad first impression, losing a business deal or simply embarrassing yourself, take heed of Holland and Brody's 10 terrible grips to avoid:

The "macho cowboy" - is the almost bone-crunching clasp many businessmen use to shake hands. What are they trying to prove, anyway? There's no need to demonstrate your physical strength when shaking another person's hand.

The wimp - is usually delivered by men who are afraid to "hurt the little lady" when shaking women's hands. Modern female professionals expect their male counterparts to convey the same respect they'd show their male colleagues.

The "dead fish" - conveys no power. While there's no need to revert to the macho cowboy death grip, a firm clasp is more powerful than one that barely grabs the hand.

The "four finger" - is when the person's hand never meets your palm, and instead clasps all four fingers, crushing them together.

The cold and clammy - feels like you're shaking hands with a snake. Warm up your hand first before grabbing someone else's.

The sweaty palm - is pretty self-explanatory, and pretty gross. Talcum powder to the rescue.

The "I've got you covered" grip - happens when the other person covers your hand with his or her left hand as if your shake is secretive.

The "I won't let go" - seems to go on for eternity because the other person won't drop his or her hand. After two or three pumps, it's time to let go. "It's a lot like a kiss -- you know when it's over," Brody says.

The "southpaw" happens when the person uses the left hand to shake because the right hand has food or a drink. Always carry your drink and plate with your left hand to keep your right one free for meet and greets.

The "ringed torture" occurs when the person's rings hurt your hand. Try to limit the number of rings you wear on the right hand to only one or two and be mindful of any that have large stones.

Three steps to a proper Handshake:

Some other things to keep in mind:

1 - As you're approaching someone, extend your right arm when you're about three feet away. Slightly angle your arm across your chest, with your thumb pointing up.

2 - Lock hands, thumb joint to thumb joint. Then, firmly clasp the other person's hand -- without any bone crushing or macho posturing.

3 - Pump the other person's hand two to three times and let go.