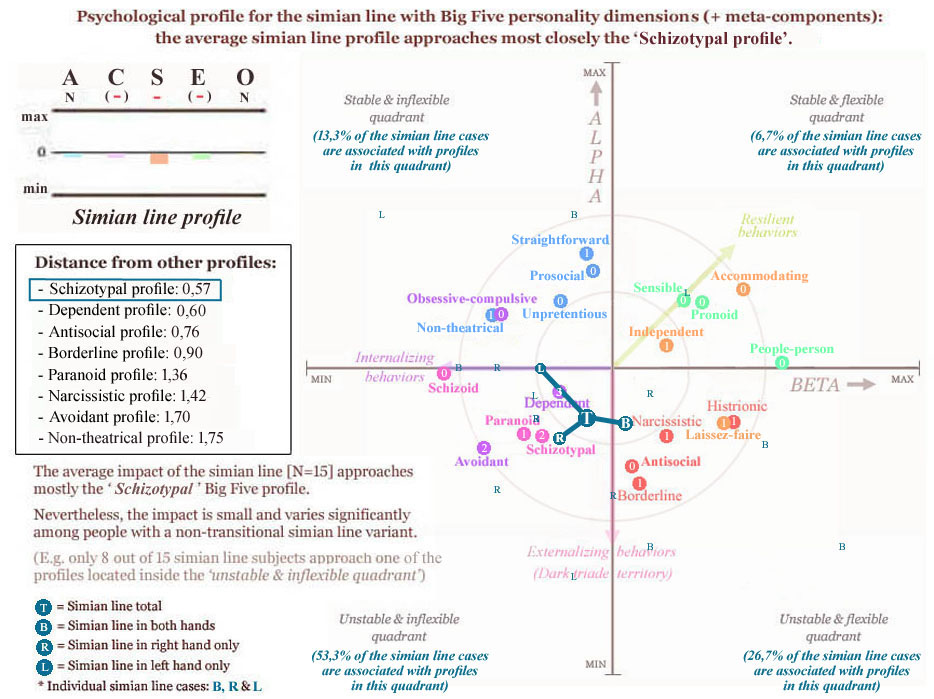 NOTICE: Included in the present study are only 15 simian line individuals (= 5,7% from a sample of 262 subjects) who's hands meet the criteria in one or both hands for a 'single crease' or a 'transitional single crease variant' (see picture above). This implicates that 6 other individuals assessed with a 'normal 4/simian 4' variation of the so-called 'transitional variants', have been excluded from this study (in order to avoid that arbitrary factors become involved whether such 'transitional variants' should be counted to represent a simian variant or a normal variant - especially, since in those variants the 'normal 1' structure is not missing!!!).

What are the implications of the simian line in the perspective of psychology? According medical science the single palmar crease can safely be regarded to represent a 'harmless minor physical anomaly' bearing merely statistical impact towards a wide range of medical issues, diseases and syndromes. The current in dept study shows a likewise statistical impact in the perspective of personality profiling, with results produced by individuals [N=15] which cover a large area of the full spectrum of possibilities in terms the so-called Big Five meta-components Alpha & Beta. However, a deeper analysis of the results does reveal a tendency towards low scores for Cognitive Efficacy, and a very consistent tendency towards a low score on at least one of the meta-components - only 1 out of 15 simian line individuals does not show this tendency, which illustrates that simian lines are by principle occasionally also found in personalities featured with both Cognitive Stability (Alpha) and Cognitive Flexibility (Beta).

The results of the present study, which relate to the perspective of normal behavior, is recognized to show a parallel with earlier reported results in the perspective of abnormal behavior. Because a relatively high simian line prevalence has been reported in studies focused on quite a few major psychiatric issues (such as: schizophrenia, psychotic behavior, developmental disorders & occasionally other forms of psychopathology such as Alzheimer disease). Curiously, the so-called 'Schizotypal personality disorder' (which involves a different phenomenon which should not get confused with a 'Schizotypal profile') is associated with a high risk for the development of psychotic behaviors.

A typical manifestation associated with simian lines is that in most cases the simian line is found connected with the radial longitudinal crease, a.k.a. the thenar crease (or the 'life line' in palmistry) - see PIC 211 displayed below. However, in some cases of a simian this connection is missing; such cases can be described to represent a 'disconnected' simian line - see PIC 201 displayed below. 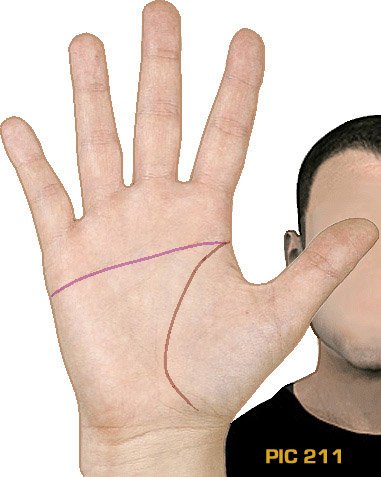 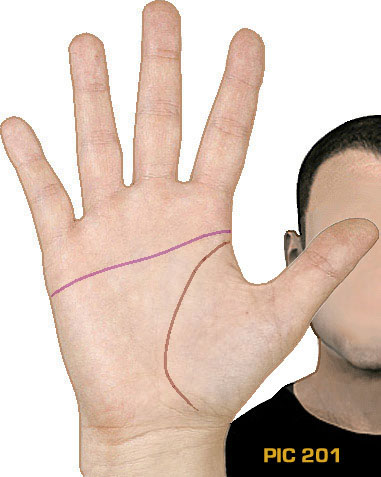 Interestingly, there is also an additional simian line case which does have a simian line that connects with the radial longitudinal crease; however, it has a 'disconnected' proximal crease in the other hand. This case is also found in the UNSTABLE & INFLEXIBLE QUADRANT. This can be recognized to represent a similar phenomenon.

These additional findings suggest that persons who's hands are featured with a simian line combined with a 'disconnected' radial longitundinal crease in at least one hand, appear to have the highest probability to have a Big Five profile that is found in the UNSTABLE & INFLEXIBLE QUADRANT: in the studied sample this is true for 5 out of 6 cases (= 83,3%). While for the other 9 simian line cases this is true for only 3 out 9 cases (= 33%), which is according what can be expected by probability theory.

The impact of the simian line in the perspective of psychology appears to show a parallel with results reported in the perspective of medical science & psychiatry. Nevertheless, even though the simian line may bare value for groups of simian liners, the effect-size for groups is typically a matter of statistics - which implies that any of the reported tendencies for the full Big Five personality profile or any of the Big5 dimensions clearly does not apply to the full group of simian liners. 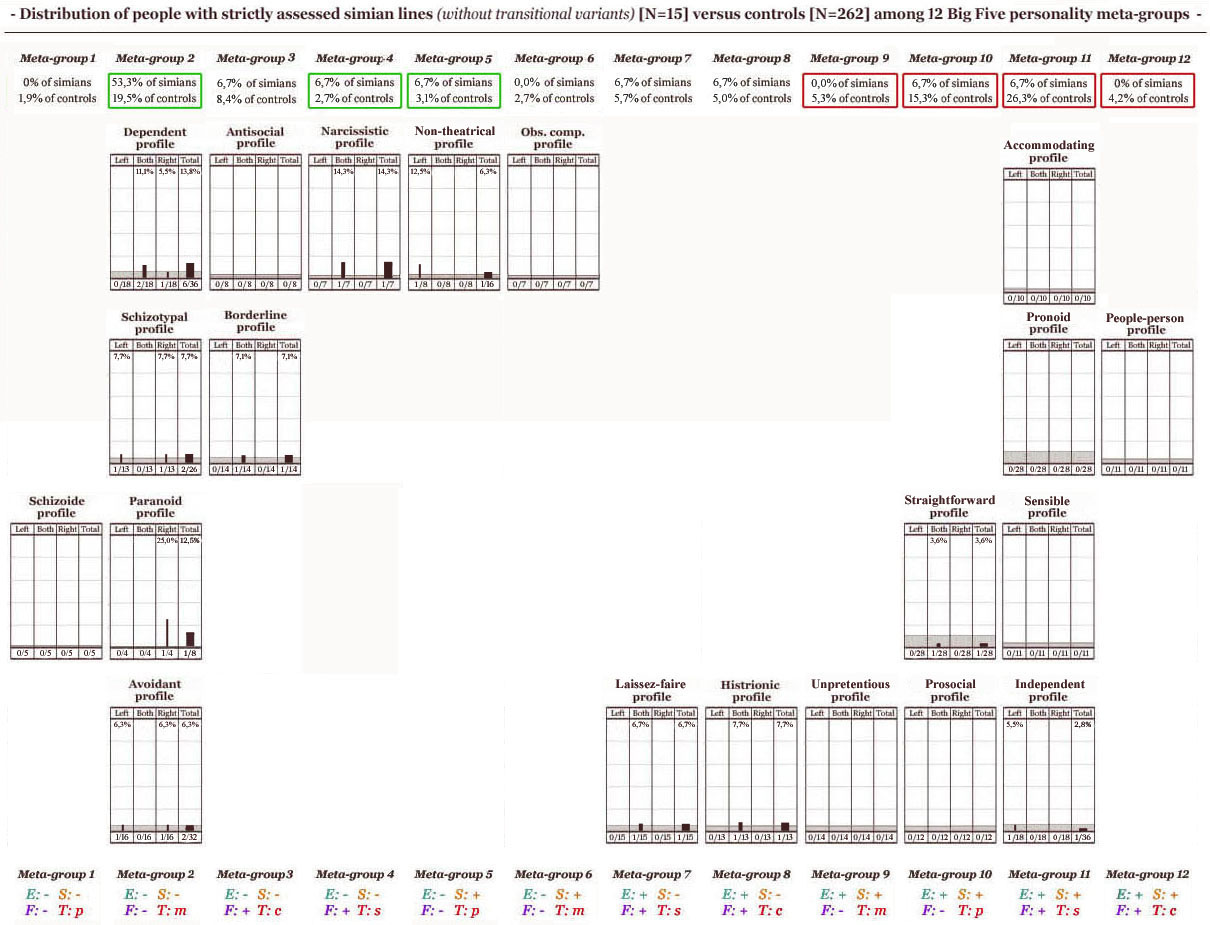