NOTICE: For this article a more comprehensive update (based on more data) is available here 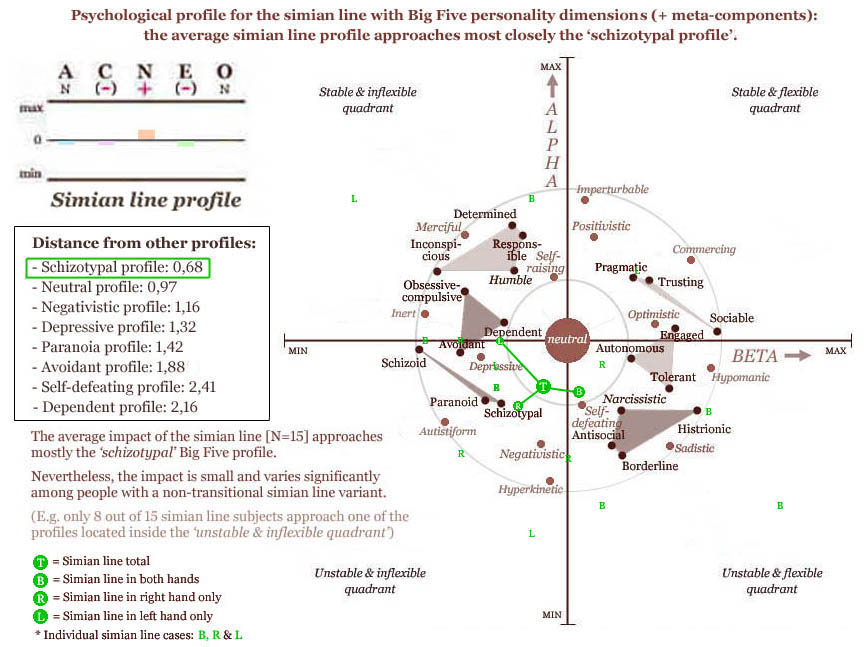 Psychological profile for the simian line with Big Five personality dimensions + it's meta-components.

An in dept study focused on 15 simian line people (without transitional variants) shows that the average comes most close to a schizotypal profile; 60% approaches a profile with average scores on the Big Five meta-components featured with a melancholic temperament.

What are the implications of the simian line in the perspective of psychology? According medical science the single palmar crease can safely be regarded to represent a 'harmless minor physical anomaly' bearing merely statistical impact towards a wide range of medical issues, diseases and syndromes. The current in dept study shows a likewise statistical impact in the perspective of personality profiling, with results produced by individuals [N=15] which cover a large area of the full spectrum of possibilities in terms the so-called Big Five meta-components Alpha & Beta. However, a deeper analysis of the results does reveal a tendency towards low scores in cognitive efficacy, and a very consistent tendency towards a low score on at least one of the meta-components - only 1 out of 15 simian line individuals does not show this tendency, which illustrates that simian lines are by principle also found in personalities featured with both Cognitive Stability (Alpha) and Cognitive Flexibility (Beta). The average Big Five profile of the studied simian line subjects approaches most closely the schizotypal profile (out of 35 personality profiles), but also not far away from the neutral profile located at the center of meta-component chart presented at the top of this article.

Knowing that the so-called schizotypal personality disorder (not to be confused with the schizotypal profile mentioned above) is widely understood to be a "schizophrenia spectrum" disorder, the result of the present study in the perspective of normal behavior is recognized to show a parallel with earlier reported results in the perspective of abnormal behavior. Because relatively high simian line prevalence has been reported in studies around the words focused on quite a few major psychiatric issues (such as: schizophrenia, psychotic behavior, developmental disorders & occasionally other forms of psychopathology such as Alzheimer disease).

Remarkable phenomana in the distribution of simian lines cases among the Big Five profiles!

Various remarkable phenomena have been spotted involving the meta-groups and the individual profiles:

• The hyperkinetic profile shows the highest prevalence among the simian liners, with 3 simian line subjects (= 20%, almost 3x higher than de 6,87% for the full research population).

• Another remarkable results involves the fact that even though only three subjects of the full research population are associated with the depressive profile, two out of these three subjects have a simian line.

FINAL NOTIFICATION: Even though the palmistry literature has a folkloric tradition in supporting the belief that simian line bare specific value in the perspective of personality or behavior (even though many palmistry authors appear to cherish private percpetions on this matter), the results of this study do not support such beliefs because the variation of behavior among simian line people is very likely much larger than what is suggested by far most palmistry books (this also applies to literature with references to palm reading, hand reading, hand analysis, chirology, chirognomy, chiromancy, chirosophy, etc.). 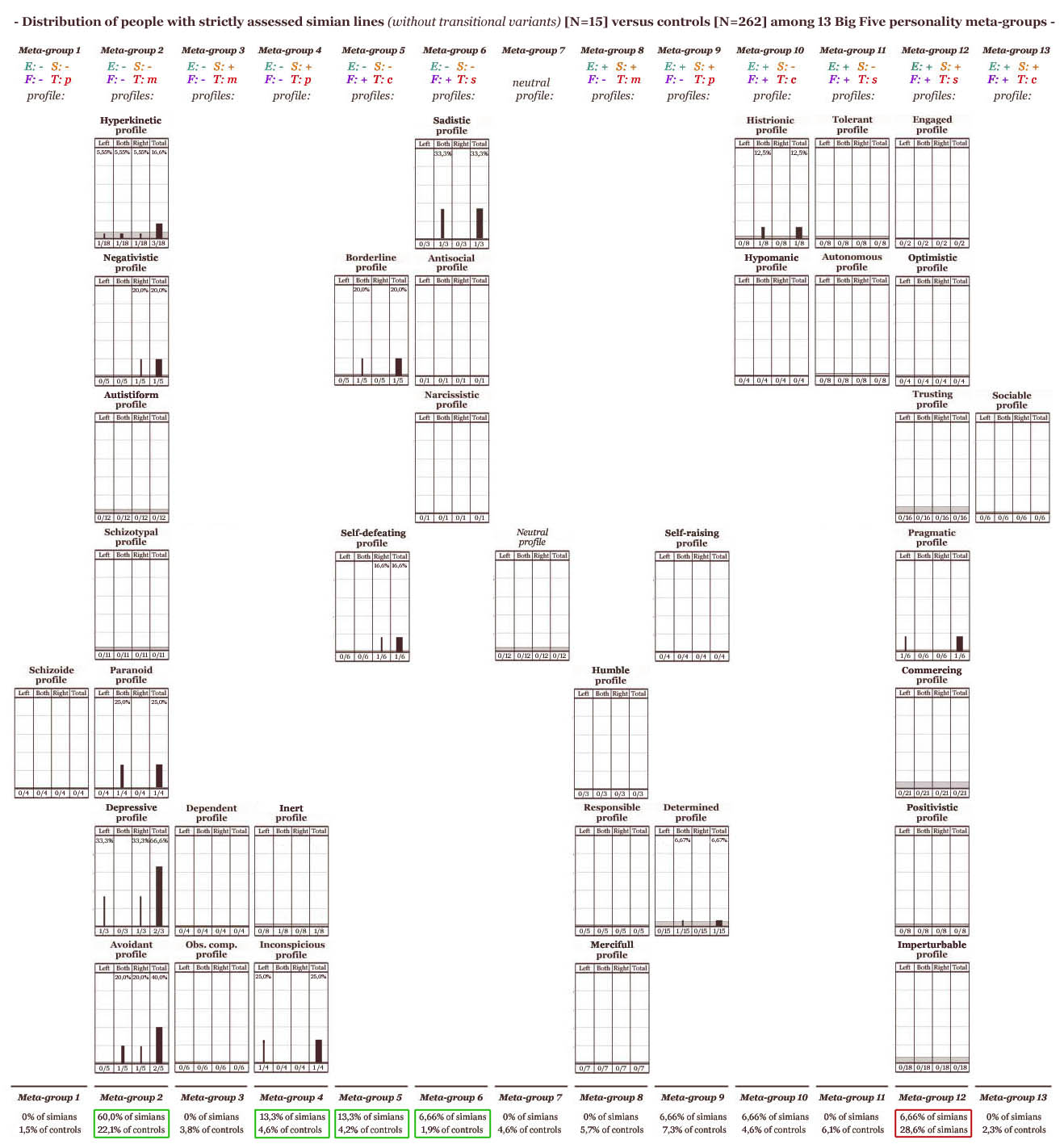 Discover the impact size of the simian line relative to other hand signs:
Major hand signs & the General Factor of Personality (a.k.a. 'trait EQ')

A detailed description for each of the 39 Big Five profiles is presented in the article:
System for Big Five personality profile interpretation + 100 celebrity profiles!