In the summer of 2011 John Manning - 'the finger professor' - has presented a revised version of his finger ratio theory. The new theory describes how the 2D:4D digit ratio should be understood as a biometric measure of the balance between prenatal testosterone- and estrogen estrogen concentrations.

Manning's new theory is presented in a PNAS-article, titled: 'Resolving the role of prenatal sex steroids in the development of digit ratio'. 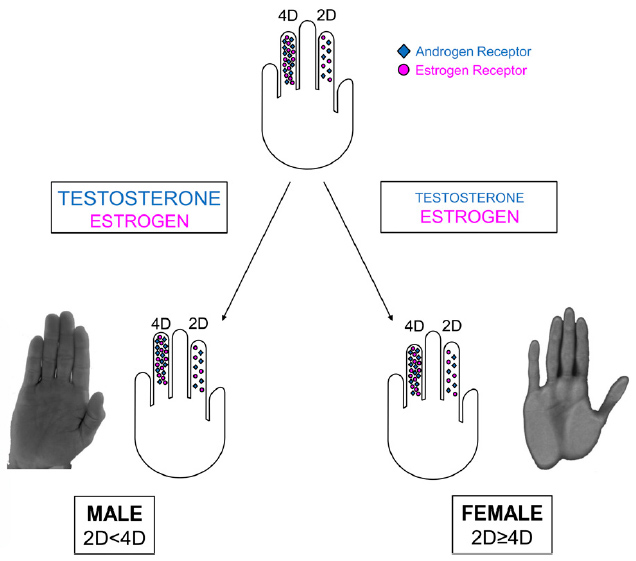 4 - The ring finger (4D) has much more hormone receptors than the index finger (2D), therefore the 2D:4D finger ratio is mostly driven by changes in the length of the ring finger (due to prenatal hormone concentrations);

5 - Studies in human & animals indicate that the link between prenatal hormones and 2D:4D finger ratio is generally stronger for the right hand;

John Manning summarizes in his article:

"Prenatal sex steroids [i.e., prenatal testosterone (PT), prenatal estrogen (PE)] are often implicated in the etiology of behaviors and diseases. They show sex differences (higher concentrations of PT to PE in males), with PT peaking at the end of the first trimester, and cause permanent "organizational" changes in the brain and other organ systems. It has been suggested that relative levels of PT and PE may have differential effects on fertility, speed, strength, aggression, autism, many cancers, and heart disease."

"...As for the future, Zheng and Cohn have provided us with a list of 19 genes that are sensitive to PT or PE and are involved in the formation of the phalanges in the fourth digit. Armed with this list of skeletogenic genes linked to 2D:4D, we can now be more focused in our examination of the links between 2D:4D and the etiology of sexdependent behaviors and diseases of the immune system, cardiovascular disorders, and a number of cancers." 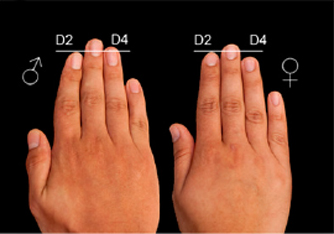