Vertical ridges in fingernails concern usually a harmless issue, because eventually as we grow older everybody develops a few vertical ridges. Vertical nail ridges origin from the anatomy of the nail apparatus (contrary to 'horizontal ridges' - which have a strong connection with physical trauma & disease).
However, sometimes the vertical ridges can become unusually pronounced featured with irregularities, and especially when other nail abnormalities get noticed as well then the unusual vertical nail ridge variants can signal (life threatening) health problems!

This article explains why the nails in most people are featured with smooth shaped vertical ridges that become more pronounced due to aging. And additionally some guidelines are presented in order to discriminate normal vertical nail ridges from the pathological variants. 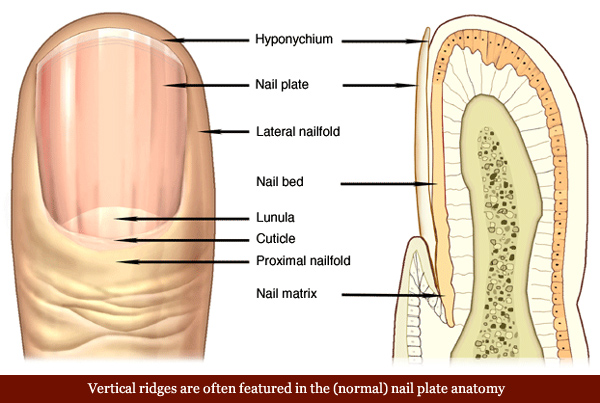 In children & young adults often appear to be missing, however at a closer look (and a proper light source) one can usually notice with bare eyes that all nails have vertical ridges. When vertical ridges appear to be missing this can often be perceived as a healthy characteristic. When the nail is also smooth, shiny, pink colored plus featured with a nail moon (lunula) this might reveal stable health during the past 6 months (3 months in children, 8 months in elderly).

The picture below displays 3 examples of vertical ridge variants within the normal range (healthy adults).

VERTICAL NAIL RIDGES IN THE ELDERLY

Brittle nails (onychorrhexis) and splitting nails (onychoschizia) is typically more often seen in the elderly, but these are usually caused by biological process that relate to fingernail cholesterol sulfate levels. So, often these features are not indicative for health related problems in terms of disease.

Vertical ridges outside the normal range can be recognized when the longitudinal ridges become very pronounced combined with irregularities in the shape of the ridges & losing the shiny characteristic. Various medical disorders have been associated with abnormal vertical ridge variants, including: chronic airway disease, psoriasis arthritis & Dariers disease (see the 3 examples below).

NOTICE: In general, nail disorders are not known for displaying a high validity regarding the specific underlying disease; therefore one should better not address too much value on the characteristics seen in the 3 examples below + the in respective associated diseases.

Vertical Ridges in Fingernails: causes, aging & health variations - what do vertical nail ridges mean? One can read a bit more about the difference between vertical ridges and horizontal ridges in fingernails (including causes & treatments) at this article: Fingernail Ridges: A Barometer to Your Health 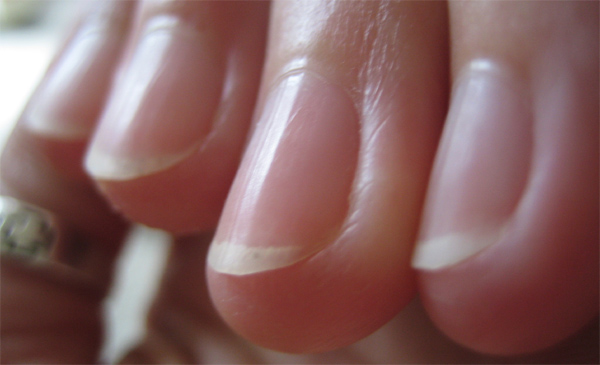 Video: What causes ridges in fingernails?


Video: Do you have these vertical ridges on your nails?


Video: Do you have these horizontal ridges on your nails?