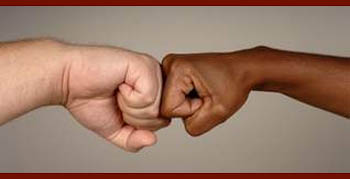 Call it a fist bump, fist pound, bones, Quarter Pounder, knuckle bump or dap. Do not call it, as Fox News host E.D. Hill did on a June 6 broadcast, "a terrorist fist jab." When Senator Barack Obama claimed the Democratic presidential nomination in St. Paul, Minn., on June 3, he playfully knocked knuckles with wife Michelle. Non-knuckle bumpers (and the media) sat up and took notice.

What was this hand gesture? What did it mean?

What happened to the good, old-fashioned handshake? Is it like the victorious 'high-five'?

The Washington Post referred to Obama's goodwill gesture as "the fist bump heard around the world." Time magazine published "A Brief History of the Fist Bump." "How to Fist Bump" videos began cropping up on YouTube. It has its own, trivia-crammed entry on Wikipedia. But for a current hot topic, the fist bump is far from new.

A "manly" alternative to the high-five, the fist bump, which some sources date back to 1970s NBA players, has been around for years in both sports and hip-hop culture.

The gesture has since gone mainstream, appearing in movies such as 2007's "Wild Hogs" and the recently released "Kung Fu Panda." Howie Mandel, the germ-phobic host of "Deal or No Deal," exchanges fist bumps instead of handshakes with guests.

"It came from my athletic background. Shaking hands is a little too formal on the gridiron," Wyrosdick said. "It's a fun, informal way to say hello or goodbye or it's a congratulatory-type gesture."

But, as most trend-followers know, once your dad's company softball team - or presidential candidate - starts doing it, the cool factor is long gone. Pensacola resident Tracy Powell, who is black, receives regular "goodbye" fist bumps from a male buddy, who is white.

"He thinks it makes him cool, but he's a dork," she said, laughing. "It isn't a cultural thing when we do it. It's an 'I'm too busy to talk right now, but I acknowledge that you're leaving' thing. It's lame, but it's funny."

On Oct. 5, 2007, New York blogger Anil (anil.vox.com), wrote, "As I've been trying to educate people... THE FIST BUMP IS DEAD. (White people, I'm looking at you.) Please stop doing this now. It's over. The time has gone." Maybe the fist bump is played out. But if Barack Obama is smart, the "freedom fist" could have a future in politics.

HISTORY OF THE FIST BUMP

The handshake, which itself dates back to ancient times, begat the "gimme-five" palm slap that later evolved into the now universal "high-five" and, finally, the fist bump.

Origins: Some claim the act of knuckle-bumping began in the 1970s with NBA players such as Baltimore Bullets guard Fred Carter. Others claim the fist bump's national debut occurred off the court, citing the Wonder Twins, minor characters in the 1970s Hanna-Barbera super-hero cartoon "Super Friends," who famously touched knuckles and cried "Wonder Twin powers, activate!" before morphing into animals or ice sculptures.

What is the next "hip" handshake? The Life section offers the following suggestions:
• The Rock, Paper, Scissors: Why not give your greeting game? A simple "hello" is no match for a heated exchange of "Paper covers rock!" "Rock smashes scissors!"

• The Thumb War: "One, two, three, four... I declare a thumb war." Meeting your future in-laws? Trying to impress the boss? Assert your dominance with this action-packed handshake.

• The Vulcan: Politicians, take note! Court the small but vocal "SciFi enthusiast" vote with this "Star Trek"-themed shake. Extra points if you follow up with the Vulcan Mind Meld.