The Simian Line
On the Merging of Mind and Heart. 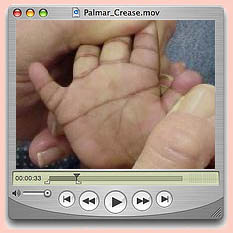 Most people have three major lines on their palms. The first would be the life line, which starts out near midway between the thumb and pointer fingers, and then heads down to the wrist. The second, the mind line, emanates near or actually entwines with the origin of the life line, but shoots across the palm instead of heading towards the wrist. The third is the heart line, which starts on the other side of the palm, originating out from under the little finger, and is equal to a good knuckle shot down, and curves upwards and across towards the base of the pointer finger.

On some hands only two major lines appear. Often times the mind line and the heart line appear to merge as one - ( this is better known as 'the simian line' - in medical vocabulary: 'the simian crease').

Much debate exists about the significance of this formation. Most of it was eclipsed from my mind for a number of years. Palmists can get about as obtuse as anyone else when they plunk down and defend various opposing positions on the subject. Likewise, anyone can get lost in such vehement banter if they try to learn palmistry purely from books.

But it all came back the day I went to hear Coleen Rowley speak. Rowley was the FBI lawyer and agent who blew the whistle on the Bureau following 9/11 - after twenty years of serving as one of the FBI's first female agents.

The simian line may be visualized as an agent responsible for sudden and radical adjustments in an individual's attitudes, behavior, lifestyle, values, goals, ambitions, and identity. Similarly, these radical adjustments may manifest in the form of new careers, oftentimes in areas these people never before considered. The individual, in this instance, may renounce a sound, secure, and long-standing career to devote him or herself to a lifestyle which may be virtually a planet apart from anything they previously considered pursuing. Leaving everything familiar behind them, these people may feel compelled to fit themselves into their new skins, as it were.

This is exactly the kind of shift that Rowley went through in her career. As anyone could have heard her relate in her talk at the Victoria Theater, she was trained in law, specifically for the FBI. But after twenty years of service, she made a radical adjustment and became a whistleblower and public confronter about the wrongs she had seen, all in the interest of the public good. Such passion shifted her to trying to get elected, meaning branching out towards a political career. The sole supporter of four children and a husband, Rowley left a long-standing, secure career to devote herself to the lifestyle of a public speaker, protector, and consciousness-raiser; all for the benefit of the rest of us on the planet.

The hand has often been described as a mirror to the human soul. From the beginning of history, folks have tried to grasp the meaning of character and destiny by carefully examining the form and surface of the hand.

But palmistry has two dimensions. One is intuitive in character, while the other roots in a more scientific approach. Scientific books on palmistry describe the simian line as something that could be seen in the hand of an ape. But I use the hand as a spring-board for intuitive judgments. I am coming from a place of emotional understanding, rather than just intellectual.

The true simian line is, technically, a running together of the head and the heart lines. It has been found to be a sign of degeneracy and criminality, which is why I did not read the simian when I first encountered Coleen; only able to perform a quickie reading before she took the stage. Emotionally - from what I sensed about her - this interpretation would not be right. Nor in the last installment of my column did I even mention the configuration, because I didn't think I had enough space to ward off misconceptions that might have been formed about her due to this marking.

Researchers have largely ignored the second class of people who also reveal a simian line.

Because psychiatric studies focus on the abnormal, the bulk of writing about this line from a psychological point of view has led to great misunderstanding. The line also indicates religious and creative people.

People who manifest the simian line, like Rowley, are earnest seekers of inner meaning. People like this create in a sort of agony to relieve themselves of an intolerable burden. I listened to Coleen describe the agony with which she wrote her much-acclaimed memos, which called attention to the FBI leadership for what she had observed following the events of 9/11.

I feel this second description of the line is much more of an apt description. Her life seems to have been characterized lately by intense internal struggle, racked between good and evil. In the life of a degenerate criminal the same sort of struggling might occur. Still a better way to describe what the line indicates on Coleen is that she is consciously evolving. She is trying to free herself - and others along with her. She is like a subtle alchemist searching to transform the dross of every day life into gold. She seeks self-improvement, as well as improvement of the human race. The fact that Coleen can be seen and understood more as an evolving type than as a criminal, degenerate, or an ape leads me to propose the following innovation myself.


Batya Weinbaum is a palmist, writer, teacher, and artist who currently lives in Carpinteria. The address to sign up for the Tending the Soul Through the Palm Newsletter - and to send Xeroxes of your palms - is 4902 Sandyland Road #140, Carpinteria, CA 93013.

The Simian Line and the Big Five dimension NEUROTICISM