What our fingers can tell us
Want to know who's going to win the Olypmpic Footbal Games this year? 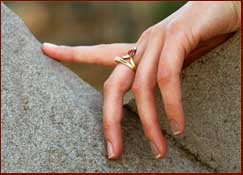 One way might be to measure the ring fingers of the Football players in each team. The team of players with the longest ring fingers are in with a big chance. According to British psychologist Professor John Manning, the length of your ring finger is a surefire way of determining your ability in sports.

The length of our fingers is determined by hormones, especially testosterone, in the first trimester of pregnancy and the finger length ratio never changes as we grow to adulthood. Our fingers, then, are a marker for early foetal development, a critical stage in the growth of brain and body.

Because of their greater foetal exposure to testosterone, men with long ring fingers, Manning says, may be more fertile, more aggressive and assertive and have more aptitude for music.

Women who have relatively long ring fingers have a greater tendency towards homosexuality/bisexuality, are more aggressive and less fertile than those women with second and fourth digits of similar length.

Finger length can also be an indictor of potential health problems. Manning and his colleagues examined 151 heart attack victims in the Liverpool area. They found that in men with relatively long index fingers, the age range for heart attack was 35 to 80 years of age. In those with relatively long ring fingers it was 58 to 80. An explanation for this difference is that men with long ring fingers have higher levels of testosterone, known to protect against heart attacks. Manning's findings, if confirmed by other studies, would mean that the length of a boy's ring finger could indicate if they have a higher risk of heart attack in early adulthood.

Manning and others have also found correlations between ring finger length and depression in men and for people with autism. A study of 102 men and women from different socioeconomic backgrounds found that men with long digits, particularly ring finger, scored highest on the Beck Depression Inventory (BDI), a widely used means of detecting depression. Testosterone has long been associated with depression but the mechanism is not understood.

Manning has just published The Finger Book, which explains more about this intriguing theory. You can read more about it here.

HOW TO MEASURE YOUR FINGER LENGTH RATIO? 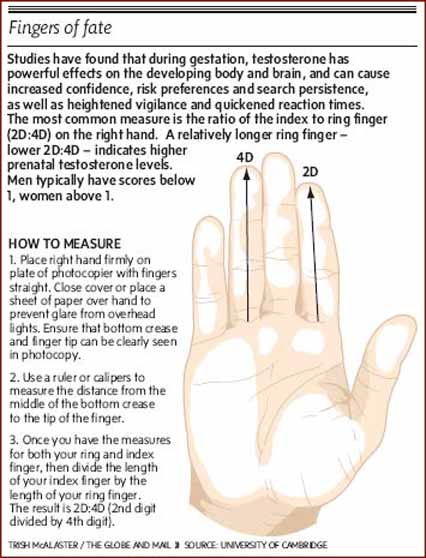 Illustration presented by: University of Cambridge.

Place your right hand palm up. Measure the length of your index finger, from where it joins your palm to the tip.

Measure your ring finger in the same way.
Divide the length of the index finger by that of the ring finger to calculate your 'finger ratio'.